By Ronan Morrissey at The RSC

Cork City FC leapt above Waterford FC in the SSE Airtricity League Premier Division thanks to a gritty 2-1 victory over Alan Reynolds' men at the Regional Sports Centre.

The Leesiders came in on a run of eight league games without a win but second-half goals from captain Conor McCarthy and the evergreen Mark O'Sullivan ensured that they would making the trip back over Youghal Bridge afterwards in possession of three valuable points, having held on following JJ Lunney's late header.

Even the opportunity for camera saves were sparse throughout the opening quarter, with the visitors' left-back Ronan Hurley sliding the game's first effort wide after nipping in to win the ball in the opposition half.

The Blues were seeing more of the ball and attempting to get their star winger into the game, two deflected efforts from Elbouzedi coming before Rory Feely nodded a Tom Holland corner over the bar.

Walter Figueira carved out a chance following good work down the other wing but his shot was from a narrow angle and at the other end, Kenny Browne blocked Kevin O'Connor's on-target header following an Eoghan Stokes' cross.

City's Mark O'Sullivan was leading the line through brute strength and cuteness in equal measure and Kevin O'Connor curled a left footed 25-yard shot narrowly over after his striker had dispossessed Lunney. The half concluded straight after Browne poked another Holland corner narrowly wide of the goal. 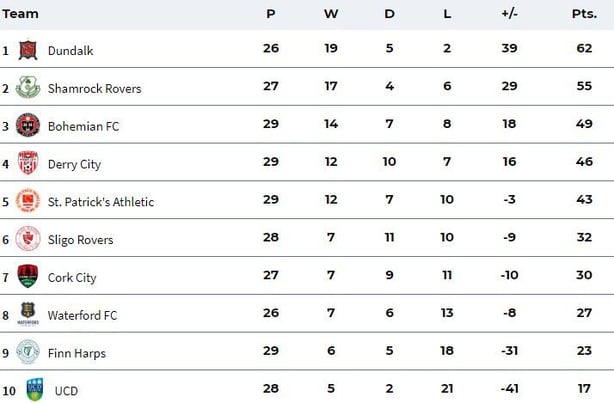 The second half picked up where the first left off - Michael O'Connor's goal-bound volley was blocked by half-time substitute Alan Bennett before a frenzied goal-mouth scramble at the other end concluded when the City stalwart saw his own volley deflected behind the goal.

The resulting corner led to the game's opening goal when visiting captain McCarthy emphatically steered O'Connor's corner goalwards after it generously dropped inside the six-yard box.

The lead was doubled midway through the half after the ball arrived at O'Sullivan just inside the attacking half. The veteran striker still had plenty to do but carried out his task to perfection - cunningly turning Rob Slevin inside-out before tucking a right footed shot across Matthew Conner and into the bottom corner of the net.

The home faithful were offered hope in the closing minutes when Lunney nodded in after Rory Feely's chipped cross but they couldn't muster a late equaliser despite their best efforts - Feely coming closest when his header clipped the crossbar in injury time.

Harps come from behind to beat Waterford in thriller

Bohemians beat the elements and Waterford