Having lost the first leg of their Europa League first round qualification tie 2-0 in Inchicore, this was alway going to be a tall order and in truth it never really looked on at Oestgoetaporten.

Gary Shaw almost gave them the lead on the night in the 34th minute but keeper Isak Pettersson pulled off a superb save to deny the attacker.

A minute later, it looked like the contest had been killed stone dead, when Jordan Larsson -  son of former Celtic great Henrik - tapped home after Brendan Clarke's initial stop to deny Alexander Fransson fell kindly into his path. 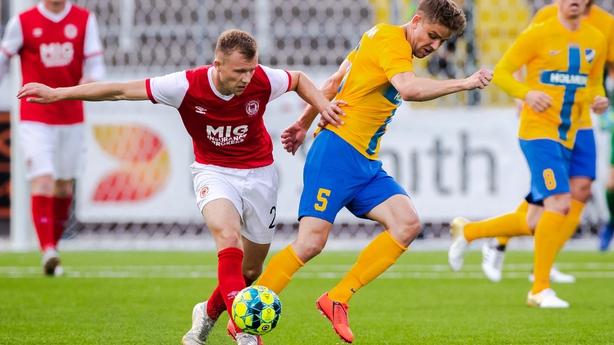 Then, a lifeline. Conor Clifford's terrific strike with 19 minutes to go gave the visitors a glimmer of hope, a scorching effort that cannoned off the underside of the crossbar.

Dean Clarke and Toner again both threatened, but Norrkoping made certain of their progression when Karl Holmberg lifted a good finish over Clarke in the 85th minute.

Kelly saw red at the death for a second yellow as Pat's made their exit.