France coach Corinne Diacre insists the hosts remain outsiders to lift the Women's World Cup after a narrow win over Norway in Nice.

Eugenie Le Sommer tucked away the deciding spot-kick to secure a 2-1 victory after referee Bibiana Steinhaus watched a replay of Ingrid Engen's challenge on Marion Torrent before giving the penalty.

France now have two wins from two after beating South Korea 4-0 and are close to securing their place in the last 16.

But Diacre feels there is a way to go until they can be considered among the favourites.

"We knew this evening was going to be a different kind of game than the one we played last Friday," she said at her post-match press conference.

"We knew we weren't going to be winning 4-0 and wanted to show a lot of respect. We did what we had to do. We're still outsiders for the tournament.

'A soft penalty'....'she's nearly taken her kneecap off' - The studio panel was divided over the VAR call that led to a France penalty. #rtesoccer pic.twitter.com/f0aHXqIp14

"We saw a difficult game and it's all about the fine details. Little by little, along the way: that's when you become the favourite."

Norway can still make it through in second place if they can beat South Korea in Reims on Monday.

Coach Martin Sjogren was happy with their display against France and felt a draw would have been a fair outcome.

"We lost the match but I thought we were equal with the French," he said.

"Of course, there are many feelings after the match. Sometimes you can handle these feelings and sometimes not.

"We knew that we were going to face a very good opponent and we had a good plan I think. We conducted the plan in a very good way.

"I wasn't surprised by the French team - we knew they were going to be athletic with fast players and speed - but we played well and I'm very proud of how my players performed out there. In my book, I think we deserved a 1-1." 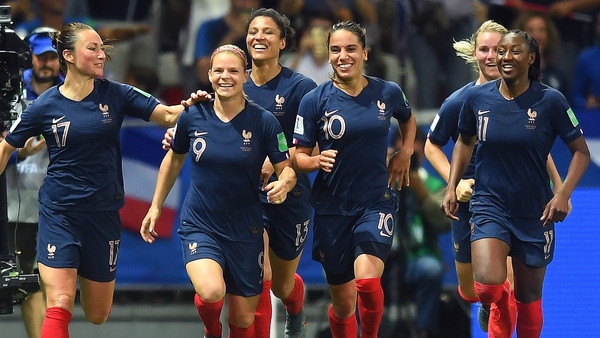 France squeeze past Norway thanks to VAR-awarded penalty Soccer