When Rhonda Jones won the first of her 117 caps, women's football was so neglected in Scotland that the national side were forced to wear cast-off uniforms from the men's team.

Now, with the country on the brink of its first women's World Cup appearance, former defender Jones says there has been a sea-change in attitudes towards women's football and that the current Scottish side of "history makers" will help a new generation of girls take up the game.

"My first cap was in 1998 against Estonia when we still wore men's hand-me-down strips," Jones told Reuters.

Players had to juggle full-time jobs with club commitments, jam strength and conditioning sessions into lunch breaks and use their vacation days to travel and go on camps with the national team, she added.

All without proper funding, and having to put up with sneers and snide remarks about women's football.

"Despite the prehistoric attitudes... we were just delighted to pull on a Scotland top and represent our country," she added.

"I'm so happy that the current squad don't have to worry about those stressors anymore and can just concentrate on being footballers." 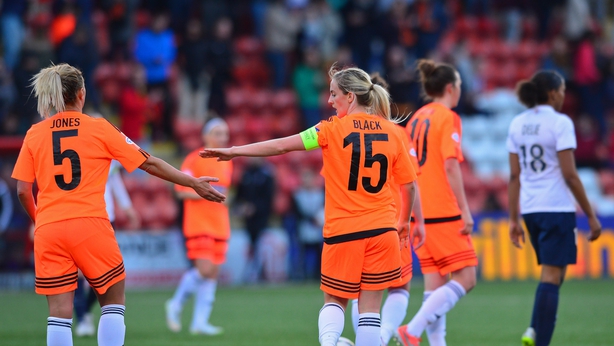 One of a select few to have played for both Glasgow clubs Rangers and Celtic, Jones said women's football faced unfair comparisons with the men's game and that all the players had ever wanted was the chance to be recognised in their own right.

"More men are becoming interested because their daughters want to play and there are actually local opportunities for them to do so," said Jones via email.

"This change in attitude has helped give girls more opportunities to play alongside boys, for clubs to grow girls teams, and for girls to play without fear or discrimination.

"I played street football with boys until I was 14. There was no girls teams and I wasn't allowed to play in boys teams, so I missed out a lot on my early-years development."

Jones played her last international in 2013, a 2-1 win over Wales, and sits 11th on the all-time caps list. She would have won more caps but did not play for the national team for four years after going to the United States on a soccer scholarship.

She was inducted into Florida Atlantic University's Hall of Fame in 2009.

Among her disappointments, failing to get to a major championship with Scotland still rankles. Jones helped the side reach the playoffs for the 2009 and 2013 European Championships but they lost both times.

The Scots have a tough group at the World Cup in France, facing England, Japan and Argentina, but Jones says they have nothing to fear.

"They have already defied the odds and beaten some tough teams along the way. They have brought the hope and belief back into Scottish Football," she added.

With the men having last reached a World Cup finals in 1998, the women's side will have the nation's undivided attention at the 7 June to 7 July tournament.

And Jones was among the record home crowd of 18,555 that saw the Scots beat Jamaica 3-2 in their World Cup send-off last month, a turnout that smashed the previous record of 4,098.

"Regardless of how they do in the competition the nation will be supporting them every step of the way," said Jones.

"They are history makers and are living the dream of every little girl, and boy, in Scotland."