Chelsea beat Arsenal 4-1 on the night but the game will be remembered for the controversies surrounding its staging in the Azerbaijan capital, the subdued atmosphere in the ground and the wide camera angles used because of the stadium's running track.

Even before any of the travelling support had set off on the 6,000-mile round trip, there had been complaints about the former Soviet republic's human-rights record, and the furore over Arsenal's Armenian midfielder Henrikh Mkhitaryan deciding to miss the game because of a long-running dispute between his country and Azerbaijan.

Then closer to the game, the lack of direct flights, the extortionate price of charter options and the usual concerns about high ticket prices and accommodation costs resulted in both clubs returning about half of their 6,000-ticket allocations.

But even despite these problems, the vast expanses of empty, mint-green seats at the start of such a high-profile game were shocking to see and, according to a report in The Times, provoked an immediate response. 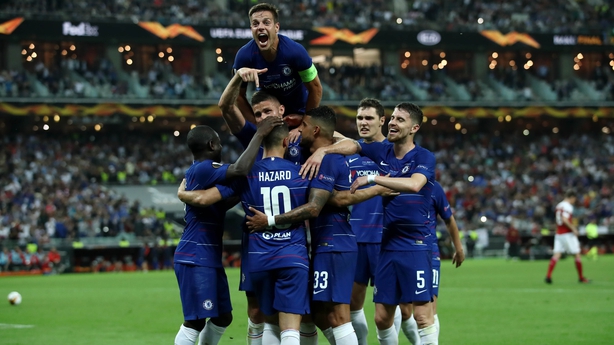 It quotes an Arsenal fan saying "lots of local people, including kids" arrived in their section, holding Arsenal flags, about 30 minutes into the game.

Asked whether this was true, a UEFA spokesperson said: "We are looking into the alleged matter with the stadium authorities and have no further comment to make at this stage."

But in response to earlier questions about the suitability of Baku for this game, and for four matches in next year's European Championships, UEFA said the official attendance for Wednesday's game was 51,370, the third highest for a Europa League Final.

Speaking after a meeting of his executive committee on Wednesday afternoon, UEFA president Aleksander Ceferin said: "We will not reassess the appointment of the hosts for Euro 2020. That's decided by the procedure, it was decided a long time ago, and it will stay that way.

"It is a pan-European Euro, where we want to show that football can bring people together.

"Of course, it would be easier to come to London, Rome or Munich than Baku, Bucharest or Bilbao, but that doesn't mean that we shouldn't play there."

On the question of whether UEFA should move finals once it knows who the teams are, a spokesperson said the procedure for choosing venues has been updated recently but host stadiums "will still need to be chosen well in advance as it would be impossible to arrange any final at short notice".