Maurizio Sarri has insisted he is "happy" at Chelsea and believes he deserves to stay at Stamford Bridge next season.

The taskmaster Italian boss claimed the first major trophy of his managerial career as Chelsea thrashed Arsenal 4-1 to claim the Europa League title in Baku.

Sarri is being courted by Juventus for a return to Serie A after just one year in west London, but insisted in the wake of the Europa League triumph that he wants to remain with the Blues.

The former investment banker now hopes to meet with Chelsea owner Roman Abramovich to thrash out the way forward, though he has two years left on his current Blues contract.

"You know very well that I love the Premier League, the level of the competition, and I am lucky because I am in Chelsea, one of the best teams in the best championship in the world," said Sarri.

"So at the moment I am happy, but of course I want to know if the club is happy, if we can improve.

"It's normal I think; I have a discussion with the owner after every season with every club."

Asked if he thinks he deserves to stay on as Chelsea manager, Sarri said: "I think so, but it's only my opinion.

"My opinion is not enough. Now I have to speak to my club. The season is finished one hour ago.

"So tomorrow I will being to speak to my club, with the owner, with the director, Marina (Granovskaia) I don't know.

"But we need to speak of course, like every club at the end of the season. We need to know what the club can do for me and what I can do better for the club.

"But I have a contract, so at the moment I am talking about nothing." 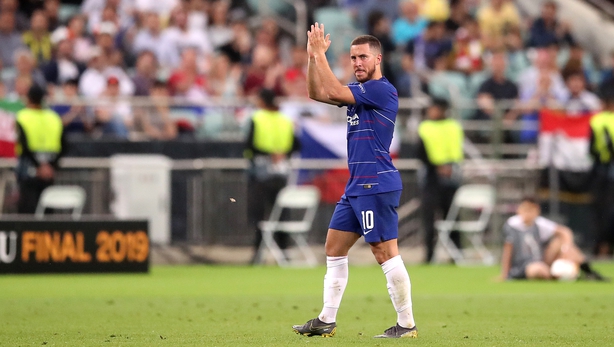 Belgium talisman Hazard scored twice and laid on a goal for Pedro as Chelsea powered home in Azerbaijan.

The 28-year-old then immediately admitted he expects to leave Chelsea this summer for his long-mooted move to Real Madrid.

Chelsea manager Sarri hailed Hazard's character, then conceded he has known for some time that Hazard was likely to leave Stamford Bridge this summer.

"Hazard is a wonderful player, but you have to spend two, three months to understand him as a man," said Sarri.

"But when you are able to understand him as a man, he is a wonderful man.

"I knew. I knew that Eden wanted to leave, of course. But as I said in every press conference I want to respect his decision."

Gritty boss Sarri has found himself under fire plenty of times in his maiden campaign at Chelsea, but has ended up with a third-place Premier League finish and a European trophy.

Sarri revealed the season's turning point as the 6-0 drubbing at Manchester City in February that forced the Blues to recalibrate their entire approach.

"I am really very happy but I think that the shirt is important, the front of the shirt," said Sarri.

"Of course the trophy is very important for us, because our feeling was we deserved to win.

"Something changed at the beginning of February I think. We lost 6-0 at Man City but we started something different.

"And so our feeling is we deserved to win."