Pierre-Emerick Aubameyang hit a hat-trick in the Mestalla as Arsenal eased past Valencia to secure their place in the Europa League final.

Having led 3-1 from the first leg, Unai Emery's side were favourites to advance and got the better of a back-and-forth contest, with Aubameyang hitting three to seal a 4-2 win on the night and a 7-3 aggregate success.

In a week of English comebacks in the Champions League, Aubameyang's goals made sure Arsenal were not on the receiving end of another.

Despite falling behind to Kevin Gameiro's 11th-minute effort, the Gunners rallied as Aubameyang equalised and Alexandre Lacazette struck to put them ahead on the night and in control of the tie.

Gameiro, who was part of Emery's Sevilla side who won three successive Europa League titles, continued his fine scoring run in the competition with another - only for Aubameyang to add the gloss with two more efforts.

A disappointing home draw with Brighton last weekend all but ended any hopes of a top-four finish in the Premier League for Arsenal.

Emery, who has not lost a knockout tie in this competition since he was in charge of Valencia in 2012, knows he needs to win the same title in Baku on 29 May to seal a Champions League return for Arsenal in his first season at the helm.

Goncalo Guedes fired well wide of Petr Cech's goal when latching onto Ainsley Maitland-Niles' clearance, the hosts attempting to start in the same manner which saw them race into a lead at the Emirates Stadium.

That goal would come as Arsenal were caught committing too many men forward and Gameiro slid in to tuck home Rodrigo's cross from close range. 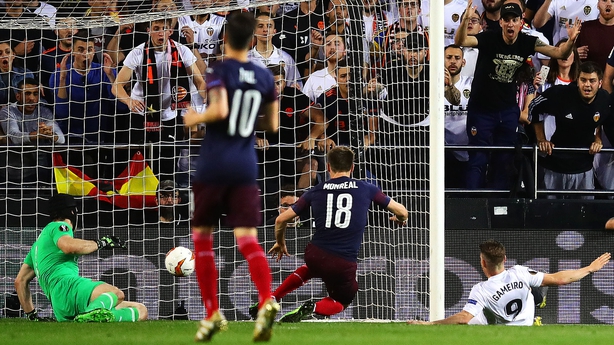 Gameiro then accidentally blocked a Rodrigo strike as Valencia took the game to their visitors.

But, just as with last week's first leg, Arsenal hit back seemingly from nowhere as Aubameyang ran on to Lacazette's header and his cool finish levelled the scores on the night.

The equaliser took some of the wind out of the Valencia sails but skipper Dani Parejo came close with a free-kick 10 minutes before the interval.

Lacazette then spurned a marvellous opportunity to all but put the tie beyond Valencia as he could only turn Aubameyang's pass onto the outside of the post when Arsenal's player of the season should have done so much better.

He made amends with a fine finish five minutes after the restart, picking up the ball in the box and wriggling free before arrowing a finish past Neto.

Valencia needed four in the final 40 minutes and pulled one back as Gameiro bundled the ball over the line having again accidentally block a Rodrigo strike. 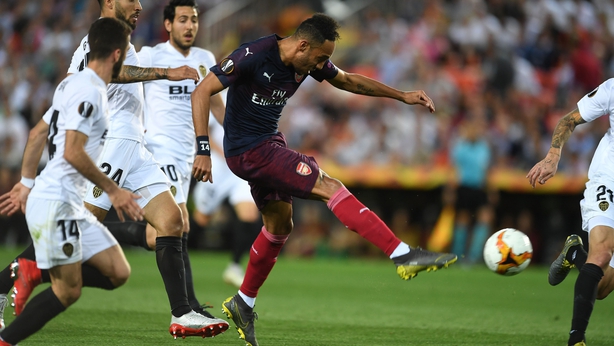 Instead in committing more men forward they conceded a third, Aubameyang tucking away Maitland-Niles' cross to the near-post.

He completed his hat-trick with a drilled finish in the closing stages, grabbing his 29th of the season in the process.

There was a skirmish at full-time, with Maitland-Niles booked for his involvement, but it took little shine off a fine evening for Arsenal, who comfortably advance to the final with Emery again proving he is the go-to man in the Europa League.