A must-win match in all but name, Ireland’s Under-17s take on Belgium in their final game of the group as they attempt to qualify for the quarter-finals of the European Championships.

Colin O’Brien’s side take on Group A leaders Belgium at Tallaght Stadium, knowing that victory will send them through to the last eight of the tournament.

Permutations might see Ireland through with a draw in their final game, however, it is an unlikely situation as the Czech Republic take on Greece in the other game, with the former side a much better unit, based on both sides’ performances against Ireland.

As a result, Ireland will need to go out with a winning mentality against Belgium, yet the top-seeded side should prove a very tough test for this entertaining Ireland outfit.

The two sides met earlier this year with Belgium taking an early 2-0 lead, before a comeback of sorts saw Ireland pull one back and were denied a late equaliser by the width of the crossbar.

Ireland should certainly have won their opening game against Greece, having created the majority of goalscoring chances and the contest should really have been settled before the visitors grabbed that late, late equaliser in the sixth minute of added time.

Thursday’s match with Belgium will be Ireland’s third game within a week and head coach O’Brien admitted that the tournament schedule is very tough on still-developing players.

With only one change made in the team following the first match, O’Brien will be forced to make several selection calls ahead of the Belgium game.

Festy Ebosele is ruled out as a result of the controversial red card picked up in the final minutes against the Czech Republic, while fellow frontman Conor Carty is also suspended due to two yellow cards.

Influential centre-half Timi Sobowale picked up an injury in the opening game and was not risked for the trip to Waterford, and remains a doubt for Thursday’s match.

Andrew Omobamidele scores Ireland's equaliser against the Czech Republic in the U17 European Championships. pic.twitter.com/1PGXWdXco6

Captain Seamas Keogh is another injury concern following a second-half substitution in the game with the Czech Republic.

In essence, that leaves 16 fully fit players to choose from, including three goalkeepers, without taking player fatigue into account, which leaves O’Brien with some big decisions to make ahead of the final group game.

"They are well prepared for it, but it is a demanding tournament, and you have to remember that you are working with youth here and a lot of players have had a long season and are coming to the end of their season in the UK.

"So you have to be careful with them as they are not adults and there is still a lot of development going on in their bodies.

"It is trying to keep it fresh going into the third game and see where everybody is. It will be the same for other countries as well, but we have to be mindful."

O’Brien admitted that he had to manage a certain amount of fatigue following the first game for the Czech match, and as a result played Matt Everitt through the middle instead of out wide, switching with centre forward Conor Carty.

The manager switched the players back at half-time at the RSC and the side looked more balanced with Everitt at his most dangerous out wide, cutting inside when possible.

"We looked at a bit of variety and versatility in the attack and there are a number of attacking players who can play in all the front three positions, which is a great asset to have in tournament football," explained O’Brien.

Defensively strong throughout the two opening games, Ireland play with a flat back four with two holding midfielders sitting in front of the defence.

And this works well to a certain extent, freeing up the creative players to go and attack, with wide men Festy Ebsoele and Matt Everitt allowed to hug the touchline, while Charlie McCann looks a real talent in that number ten role.

But Ireland often lack the numbers up front and many good deliveries into the box were not capitalised on with a lack of shots on target also an issue in both games. 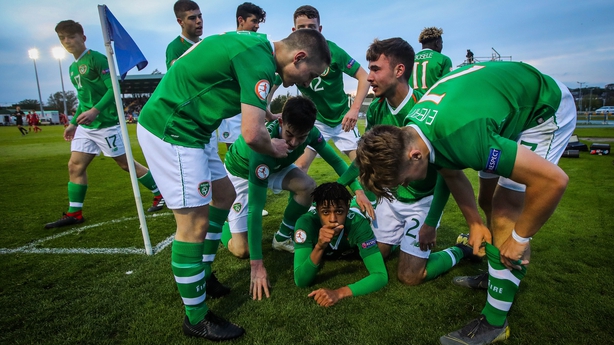 We got glimpses of the potential of this Ireland side in Waterford as full-backs James Furlong and Sean McEvoy were encouraged to push forward as the game progressed with Ireland chasing an equaliser.

And against Belgium, Ireland are going to have to become the instigators with the group leaders knowing that a draw will see them through.

Perhaps the most vital player in this Ireland XI is the impressive and most energetic holding midfielder, Joe Hodge, who plays his club football at Manchester City.

The ever-alert Hodge is constantly looking for the ball, reads the game brilliantly and is always on the move once he finds a team-mate, and he will certainly be the man to allow Ireland to go and play their attacking football when they need it most on Thursday night.

"He was immense, absolutely immense tonight," said O’Brien, commenting on Hodge’s performance against the Czech Republic.

"He is a real midfield dynamo, a really intelligent player and a key player for us."

Watch the Republic of Ireland v Belgium live on RTÉ2 and the Player from 6.30pm.