Pep Guardiola believes winning the title this season would rank among his greatest achievements.

The Manchester City manager claims even just taking his side to the brink of retaining the Premier League crown - given the standard of the opposition - is the most satisfied he has felt as a manager.

City's battle for the title will not be concluded until the final day after Liverpool returned to the top with victory over Newcastle on Saturday. City face Leicester at the Etihad Stadium on Monday needing to win to move back above the Reds and retain control of their destiny.

Guardiola, who has won 25 trophies in a glittering career that includes spells in charge of Barcelona and Bayern Munich, feels he has never been pushed as hard.

He said: "It's the toughest league I've ever played as a manager, for the quality from the rivals, no doubts. That's why being there is incredible.

"But, of course, only one will take the prize and the other one will be at home sad."

Asked how he would rank title success, he said: "A lot, a lot. One of the biggest achievements."

"Arriving at this stage, two games left with 92 points, after 100 points, that is the most satisfaction I've had as a manager"

City won the Premier League by 19 points and accrued a record 100 points last season but this term they have been matched almost blow for blow by Liverpool.

Guardiola is delighted his players have been able to maintain the standards they set last year amid greater pressure.

He said: "Arriving at this stage, two games left with 92 points, after 100 points, that is the most satisfaction I've had as a manager. It's not easy, honestly, and they did it again.

"I would not say that 100 points was bad and that we are not satisfied with what we did last season but, at the same time, we were seven points behind (this season).

"You give credit for the titles and how huge our rival is. In my career as a manager, I played against incredible sides and there are two that were 'wow'.

"One is the Barcelona of Luis Enrique with Neymar, (Lionel) Messi and (Luis) Suarez in front. The other is this Liverpool. I think they're the best two sides I've faced as a manager.

"That's why being there, with it in our hands, fighting against them until the end, after being seven points behind - it's incredible what we have done. But it will make more sense if we are able to lift the Premier League." 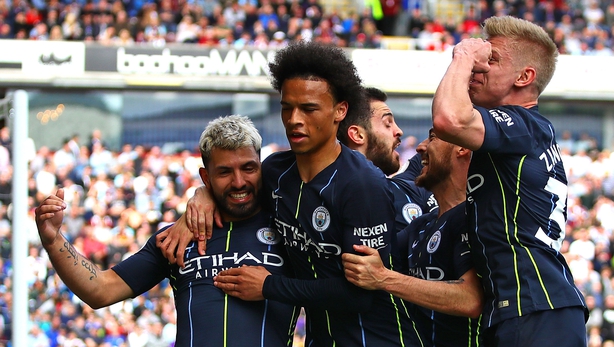 City have shown their champion quality by winning their last 12 games. Since the shattering blow of Champions League elimination last month they have come through some stern tests against Tottenham, Manchester United and Burnley.

But they will still need two more wins to complete the job.

Guardiola said: "I think in the last games of the season when everyone plays for something, always the games are more tight. People take more caution about what happens.

"We play for the Premier League and sometimes your mind is thinking a little bit about what will happen. That's normal.

"What's important is at Burnley we didn't concede one shot on target or one corner away. That's awesome, that is incredible.

"We created enough chances to score more goals and on Monday we'll try the same."