Tottenham defender Jan Vertonghen accepts the art of defending will have to adapt to VAR after the latest controversy in the Champions League quarter-final win over Manchester City.

City were awarded a penalty in the 13th minute of Tuesday's first-leg tie at the Tottenham Hotspur Stadium when Raheem Sterling's shot hit Danny Rose's arm.

Nobody appealed at the time and it was only after the VAR official advised Dutch referee Bjorn Kuipers to take a look that the spot-kick was given.

Although Rose's arm was outstretched, by no means was the handball intentional, but under UEFA's directive it had to be given as a penalty.

Spurs goalkeeper Hugo Lloris ensured that it was not a potential decisive moment as he saved Sergio Aguero's tame effort from 12 yards before the hosts went on to win 1-0.

Vertonghen has urged the decision-makers to think like footballers amid fears there could be a huge increase in penalties awarded once VAR is up and running in the Premier League next season.

"No one expected it. They didn't even appeal for it so it was extremely weird to concede a penalty like this,"

Vertonghen said. "That's VAR. In a way it's good. I'm not always a fan but at the end everyone will benefit from it.

"It takes a lot away from the game, I think. But, like I said, at the end it will give you more. But it can happen for us as well. If we got a penalty in this way I would be very happy.

"Football is always a very emotional game, and VAR is changing that a bit.

"I think so many things look like a penalty in slow motion.

"I think we have to change the way we defend. We are not pulling people down but even a small touch, if you watch it 20 times in slow motion, it will give so many more penalties.

"I think you'll see in the stats in the next few years in the Premier League, you will see at least 20, 30, 40 more penalties.

"I think we all need to adapt. The players, the referees and how they think as a player sometimes.

"Sometimes you can't do anything else than put your body on the line, and I don't even know, but it's important that referees think as a football player sometimes.

"You can't even touch anyone. Before it was quite physical, but in a fair way. But now you are too scared to get close to someone." 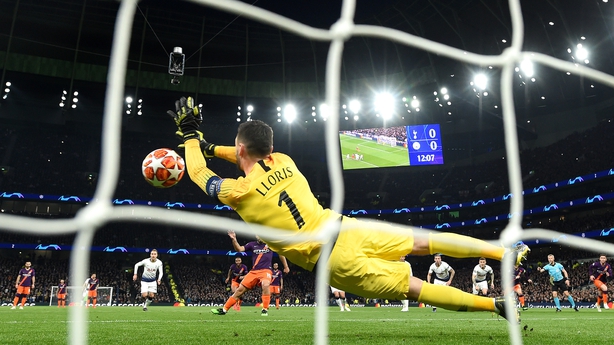 Rose, playing his first game since revealing he was waiting to quit football due to the handling of racism in football, conceded that the ball hit his hand and was grateful to Lloris.

"I did hit my arm and I didn't think my arm was outside my body," the left-back said.

"But the referee said it was and if VAR wasn't there, I would have got away with it.

"But he's given it and luckily Hugo got me out of trouble. Even though it was after 13 minutes, it was a game-changing save.

"I'm not sure I can complain. I haven't seen it again. It did hit my arm but it certainly wasn't intentional.

"I'm just grateful Hugo saved it and we kept a massive clean sheet, scored at the end and have something to look forward to next week.

"It's unnatural to try to defend a shot with your arms behind your back and I'm not sure that's something the manager would be promoting.

"But there's not much I can do, I have to learn from it.

"I was lucky Hugo made the save because if they were 1-0 ahead after 13 minutes it would have been a long evening for us."

Meanwhile, Spurs could be handed a €5,000 fine by UEFA after a supporter ran on to the pitch towards the end of the game.

They confronted City defender Fabian Delph before being ushered away by stewards.

The governing body will see if the incident is included in Kuipers' report before deciding on any sanction.