Goals from Sean Kavanagh and a brace from Aaron McEneff was enough to earn Rovers their first win at the Cross since June 2013 and inflict a fourth defeat of the season on City, who responded in vain through Dan Casey.

Both sides came together for a minute’s applause shortly before kick off to honour the memory of the late RTÉ Sport reporter Pat McAuliffe, who sadly passed away on Monday morning.

Stephen Bradley made just two changes to the side that defeated UCD 3-1 in Tallaght in their last league outing with Trevor Clarke and Joey O’Brien replacing Dylan Watts and Samuel Bone.

John Caulfield made two switches to the starting eleven that lost 1-0 away to Dundalk as James Tilley and Dan Casey took the places of Shane Griffin and Colm Horgan.

The visitors immediately took control of proceedings and they almost took the lead inside the opening minutes but Greg Bolger’s half volley from the edge of the penalty area dropped just wide of the near post.

City’s first goal scoring opportunity of note came in the 20th minute but Karl Sheppard headed Kevin O’Connor’s cross from the last well wide of the far post from a difficult angle.

And just as it looked like Cork were growing into the game, Rovers took the lead thanks to a lovely finish from Kavanagh at the end of an incisive move.

Aaron Greene cleverly laid the ball into the path Bolger and his superb cross to the near post was side-footed home by the on running Kavanagh from close range.

Ronan Finn was desperately unlucky not to double the Hoops’ lead midway through the first half but his curler from the left of the area clipped the top of the crossbar.

The Leesider’s thought they had levelled against the run of play just shy of the half an hour mark as Graham Cummins powered his header into the top right corner but his celebrations were cut short as he was adjudged to have been in an offside position.

That decision from the linesman proved to be decisive as the title chasers finally made it 2-0 when Aaron McEneff’s deflected shot from the edge of the box found the bottom left corner.

City, to their credit, responded well to that setback and shortly after Kevin O’Connor’s fierce drive from distance was parried by goalkeeper Alan Mannus, they pulled a goal back in fortuitous circumstances through Dan Casey.

Conor McCormack helped the ball back into the box following a corner and Roberto Lopes’ poor header fell straight to Casey and the defender reacted well to nod the ball into the far bottom right corner.

Rovers regrouped during the half time break and following a tame opening to the second period they would restore their two-goal lead with a stunning strike from McEneff.

Jack Byrne’s clever pass inside picked out the attacking midfielder 25 yards from goal and after he composed himself he expertly swerved the ball into the top right corner of the net.

Cork City 1-3 Shamrock Rovers McEneff from outside the box for his second and Rovers' third of the night https://t.co/KW4UKeGaIr pic.twitter.com/gazhtqnCfv

The visitors never looked like conceding again as the second 45 wore on and McEneff went close to completing his hat trick with 15 minutes remaining but after a neat one-two with Greene, he rolled the ball wide of the far stick. 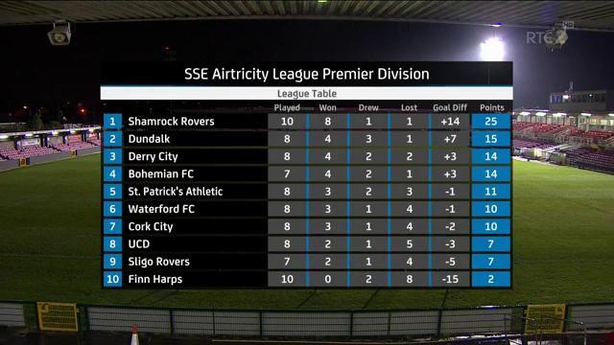