But Hazard popped up with his 13th Premier League goal of the season to earn a point on Chelsea's 114th birthday.

The Blues had beaten Tottenham and Fulham to revive their Champions League qualification hopes, but they failed to take full advantage of Spurs' slip-up at Southampton on Saturday.

Maurizio Sarri's side are now four points behind their London rivals in the four-way battle for third and fourth place which includes Arsenal and Manchester United, albeit with a game in hand.

Nuno Espirito Santo's side had come from behind to beat the Blues at Molineux in December for the second Premier League loss of Sarri's first season.

The seventh-placed visitors were seeking to become the first promoted team to do the Premier League double over Chelsea since Charlton in 2000-01.

Chelsea had looked like they had overcome their difficult spell which left Sarri clinging to his job.

The 60-year-old Italian made six changes to the side which beat Dynamo Kiev 3-0 last Thursday in the Europa League last-16 first leg, with Hazard, Gonzalo Higuain and N'Golo Kante restored to the starting line-up.

But the return of the big hitters did not yield instant results.

Chelsea's ponderous possession penned Wolves back, but the visitors were not unduly alarmed.

The Blues had one shot on target in the first half, when Higuain's effort was held by Rui Patricio at the near post.

Chelsea also had two hopeful handball appeals. The first was when Leander Dendoncker blocked a Pedro cross and the next followed the resulting corner, when Jimenez sliced into his own arm, which was in a natural position.

Former Chelsea strikers Jimmy Floyd Hasselbaink and Didier Drogba, watching from absent owner Roman Abramovich's box, did not look entertained by Sarri's side and there were muted whistles and boos at half-time.

Hazard tried to spark Chelsea into life and was tripped by Matt Doherty. The initial contact was outside of the area and referee Michael Oliver blew for a free-kick despite the Belgian tumbling into the box. David Luiz's set-piece was wasted. 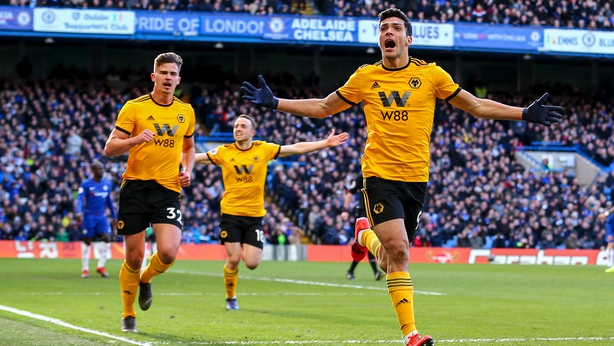 Wolves scored with their first attack of the game 11 minutes into the second half.

Diogo Jota surged through a passive Chelsea defence and exchanged passes with Jimenez, whose poked shot deflected off Cesar Azpilicueta and bobbled in past Kepa Arrizabalaga.

Chelsea sought an immediate reply. A Pedro shot from 25 yards was helped over by Patricio.

From the resulting corner, Jimenez's defensive header at the near post took the ball beyond Higuain's reach at the far post, as Chelsea were frustrated again.

Sarri had already sent on Ruben Loftus-Cheek and Callum Hudson-Odoi, for Mateo Kovacic and Pedro, when he took off Jorginho and sent on Willian.

It was a departure from Sarri's usual substitutions and was met with applause and a belated change in formation, to 4-4-2, once the messages were relayed.

But even with Hudson-Odoi and Willian on the flanks and Hazard up front alongside Higuain, Chelsea struggled to find openings.

Willian cut in from the left and was denied by Patricio before Hazard did similar in the second minute of stoppage time.

Hazard stepped by Ruben Neves and drilled in a swerving shot from the edge of the area to save Chelsea's blushes.