Arsenal moved back into the Premier League top four with a straightforward victory over struggling Southampton.

First-half goals from Alexandre Lacazette and Henrikh Mkhitaryan were enough to secure a 2-0 win which leaves Saints in the relegation zone.

The Spaniard made six changes from Thursday's Europa League win over BATE Borisov as both Mesut Ozil and Pierre-Emerick Aubameyang dropped to the bench.

Southampton created enough chances to have at least got on the scoresheet but it was at the back where they were again suspect and they remain 18th and a point from safety after leaving the Emirates Stadium empty-handed.

They had beaten Arsenal in December to end a 22-match unbeaten run for Emery's side but could not seal their first-ever Premier League away win over the Gunners.

The visitors had a great early chance as Nathan Redmond broke the offside trap and ran through on goal, only for Bernd Leno to rush off his line and block the shot.

Arsenal went straight down the other end and took a sixth-minute lead as Lacazette coolly turned home a wayward Mkhitaryan volley after calls for a foul on Lucas Torreira had fallen on deaf ears.

Southampton responded well to their early setback and had two decent opportunities to level as Stuart Armstrong's header was blocked by Sead Kolasinac before Matt Targett's strike was palmed away by Leno.

Once again, Ralph Hasenhuttl's men were made to pay almost instantly as Jack Stephens miscued a backpass with goalkeeper Angus Gunn closed down by Alex Iwobi. His deflected pass found a way through to Mkhitaryan, who made no mistake with an unerring finish to double the lead. 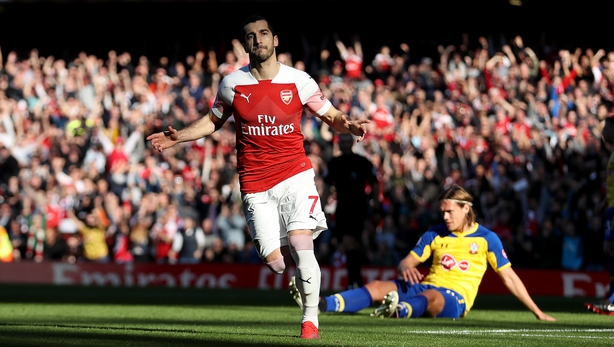 Yan Valery was busy on the wing for Saints and worked two good shooting chances before Lacazette forced Gunn into action with a header from Granit Xhaka's corner.

The France international was then guilty of missing a close-range chance, firing well over the crossbar from five yards out having been picked out by Kolasinac.

Lacazette was starting to find spaces on a regular basis and drew another smart stop from Gunn with a low drive from the edge of the box before the break.

Hasenhuttl made two changes at the interval as both Charlie Austin and Michael Obafemi came on - but it was James Ward-Prowse who came close to pulling one back after Xhaka had gifted him the ball on the edge of the box.

Arsenal lost Stephan Lichtsteiner to injury before the hour-mark as Laurent Koscielny came on in his place with Shkodran Mustafi pushed out to right-back.

Ozil was the next man off the bench for Emery, who also turned to Aubameyang in an attempt to make sure of the three points.

Aubameyang should have done better when played in behind but opted to cross the ball, Jannik Vestergaard's deflection almost leading to an own goal but for some good work from Gunn.