The defender nodded in deep into stoppage time - although the Magpies wanted a foul on goalkeeper Martin Dubravka with Boly appearing to have wrapped his arms around him - to earn a 1-1 draw at Molineux.

Isaac Hayden's first goal for 17 months looked to have won it for Newcastle, who sit just a point above the Premier League relegation zone.

Seventh-placed Wolves missed the chance to secure a fourth consecutive top-flight league win for the first time since 1972.

The hosts wanted a penalty after 18 minutes when neat build-up play ended with Jimenez tumbling under pressure from Christian Atsu but referee Graham Scott waved away their appeals.

A minute later, 11-goal Jimenez hooked over as Wolves began to exert their authority and Ruben Neves curled over shortly afterwards.

Only rock-bottom Huddersfield had scored fewer than Newcastle this season and the Magpies struggled to create again at Molineux.

The hard-working Salomon Rondon was isolated, with the visitors failing to gather any momentum or composure on the ball, as he fed on scraps.

In contrast, Jimenez conjured his own opening 10 minutes before the break when he cut inside from the right and Dubravka had to be alert to keep out his effort after it flicked off Fabian Schar. 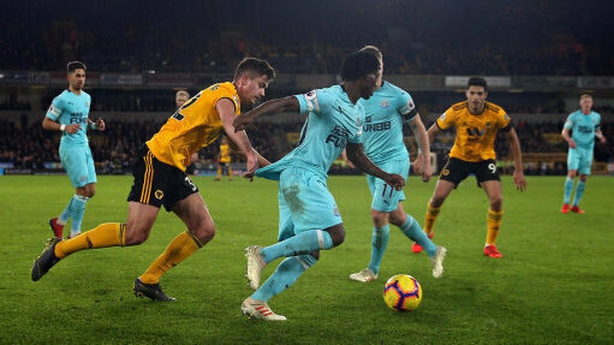 Rondon's weak header from DeAndre Yedlin's cross did at least rally Newcastle and allow them to finish the half on top.

Wolves came close to opening the scoring three minutes after the break.

Ryan Bennett's flick almost fell perfectly for Matt Doherty at the far post but the defender - who scored a last-minute winner at Newcastle in December - put his header over under pressure from Sean Longstaff.

But Newcastle had grown into the game and they silenced Molineux with the opener after 56 minutes.

The Magpies patiently kept the ball before Schar released Hayden and his angled drive caught out Rui Patricio, who could only push it in at the near post.

It was a goalkeeping error from the Portugal international to gift the midfielder just his fifth career goal and first since October 2017.

In response, Dubravka denied Jota and Leander Dendoncker and Newcastle brought on Almiron for his debut with 18 minutes left.

Jimenez should have levelled with nine minutes left when Adama Traore's volley fell for him six yards out but he miscued his free header and the ball dropped well wide.

Wolves had scored 13 goals in the final 10 minutes this season and made it 14 to level well into four minutes of stoppage time when Boly got above Dubravka to nod in Traore's looping cross from close range.