Aston Villa staged an incredible fightback to salvage a dramatic 3-3 draw against Sheffield United with three goals in the last 10 minutes.

United had seemingly been heading for a convincing win, which would have taken them top of the Sky Bet Championship, after skipper Billy Sharp scored his second hat-trick of the season.

But Villa, struggling for long periods, staged a dramatic turnaround after newcomer Tyrone Mings sparked off their recovery in the 82nd minute. Sharp's inspirational goalscoring had earlier been the major difference between the two teams.

The pedigree of the United side was a problem for a Villa team again without the services of Jack Grealish and James Chester.

As a result, Villa were subjected to heavy pressure and it was no real surprise when the Blades took an 11th-minute lead.

A left-wing corner was knocked back into the middle by on-loan Gary Madine and Sharp was on hand to score from about eight yards to record his 21st goal of the season.

Villa's makeshift defence was never at ease against relentless pressure from a United side that was visibly keyed-up and determined to maintain their concentrated promotion push.

Villa were openly frustrated by United's ability to switch swiftly from defence to attack.

John McGinn was a tireless worker but generally Villa were badly disjointed.

There was an immediate second-half improvement from Villa as they seemingly realised they had to raise their game to make an impact.

In the circumstances United were seemingly content to mount a defensive blockade but they were denied a second goal by a last-ditch tackle by Tommy Elphick to thwart Madine. 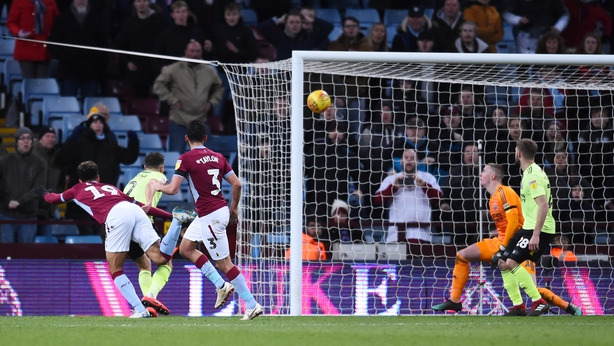 But in the 53rd minute Sharp again demonstrated his lethal finishing skills, albeit in controversial circumstances.

Nikola Kalinic made a save but the ball bounced above him as he was falling and Sharp nudged his effort over the line, with the keeper appearing to have hold of the ball with both hands.

Sharp was on fire and could not be contained, as he demonstrated when he headed his third goal in the 62nd minute following a right-wing cross.

Green then popped up at the back post to head home John McGinn's cross for his dramatic injury-time equaliser.