Morelos will sit out three games in total after a panel convened by the Scottish Football Association threw out a wrongful dismissal claim. The striker was sent off by Bobby Madden for stamping on the groin area of grounded Aberdeen defender Scott McKenna, who was also dismissed for lashing out at his rival.

Rangers goalkeeper McGregor faces a two-game ban after being handed a notice of complaint from SFA compliance officer Clare Whyte for catching Dons midfielder Lewis Ferguson during his team's 4-2 win on Wednesday.

The 37-year-old will discover his fate on Tuesday along with Hibernian defender Darnell Johnson, who was cited for a challenge on Celtic left-back Emilio Izaguirre.

Morelos will serve an immediate two-game suspension, ruling him out of Saturday's William Hill Scottish Cup tie at Kilmarnock and the Ladbrokes Premiership contest with St Johnstone on February 16.

He will also serve an additional one-match ban in the Premiership, because it is his second red card of the season in the league. The other also came against Aberdeen and an earlier red card for a kick at McKenna was downgraded to a yellow.

That suspension kicks in 14 days on from Wednesday's game, meaning he will miss a trip to Hamilton on 24 February. 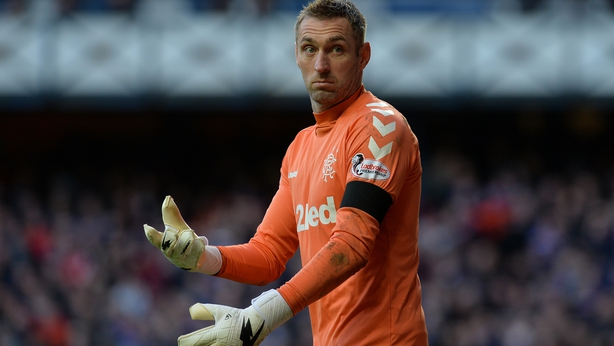 Assistant manager Gary McAllister earlier defended Morelos and claimed he had been a victim of his past record.

McAllister said: "I felt Alfredo's reputation went ahead of him on this one, and I think he was trying to get out the way. I think there was a conscious effort not to make a stamp.

"Alfredo has had moments prior to us coming here, he's a very competitive player, he gets involved in lots of skirmishes.

"That's the nature of his game, I don't think you can take away his tenacity, which I think we all agree is a big part of his game.

"From a discipline point of view, he's got to improve. We are trying to help him. But in this instance, Alfredo has got previous and I think that possibly went against him.

"His legs are up but they have got to come down somewhere."

McAllister also defended McGregor, who caught Ferguson with his outstretched boot in the shin as he raced off his line to smother a through ball.

McAllister said: "I just see Allan McGregor getting into position to make the save and then he tucks himself up into a ball to prevent himself being hurt."

On-loan Leicester defender Johnson was booked for an over-the-ball challenge on Izaguirre on his Hibs debut but the compliance officer has deemed it serious foul play on studying footage.

The 20-year-old also faces a hearing on Tuesday and a possible two-match ban.

No action has been taken against Celtic defender Jozo Simunovic after he caught Hibs forward Oli Shaw with his arm in an aerial challenge.