Liverpool manager Jurgen Klopp insists a six-point lead at the top of the Premier League means nothing at the halfway stage of the season.

The Reds have been installed as the new title favourites after they comfortably beat Newcastle 4-0 and Manchester City lost for the second successive match, going down 2-1 at Leicester.

Liverpool's next two matches are at home to Arsenal and away at City, where Klopp's side will arrive still top of the table irrespective of their result against the Gunners.

Klopp, however, is refusing to look too far ahead as City began December top, two points clear with a goal difference 14 better than Liverpool, but head into their final match of the year third, seven behind Klopp's side having seen their goal difference advantage reduced to zero.

"That means nothing. We play Arsenal and City," he said of their six-point lead over Tottenham, who have taken over second place from Pep Guardiola's side.

"I had no idea how any other teams were playing, I didn't even know where they were playing. Afterwards I got the results and I can say it didn't do a lot for me. It is just information.

"It's good that we have six points than other teams, or seven, but that is pretty much all."

Liverpool are only the fourth team to remain unbeaten at the halfway stage of a Premier League season, having won 16 of their 19 games.

They have already had their best start to a season in their history and the clean sheet against Newcastle was their 12th of the season - the same number they recorded when they last won the title in 1989-90.

"What we wanted to do all the time was create a basis for the rest of the season. Now the first part of the season is over," added Klopp, whose side won the game through goals from Dejan Lovren, Mohamed Salah, Xherdan Shaqiri and Fabinho.

"We want to create our own history. It is the first Liverpool team in the Premier League unbeaten (at halfway). We have conceded seven goals.

"All good numbers but there are 19 games to go. So we play Arsenal, we play City, we play Tottenham. We play all of them again. There is a long way to go, we all know that. 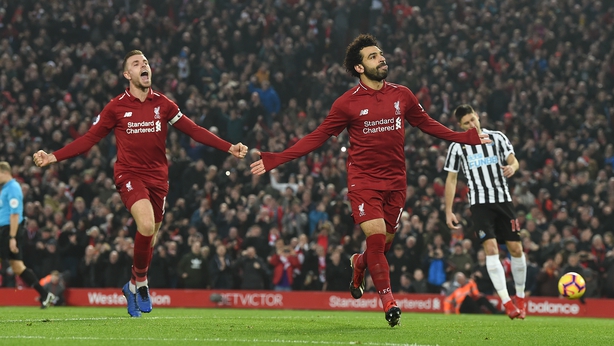 Newcastle's former Liverpool manager Rafael Benitez has no doubt his old club have the quality to go all the way.

The Spaniard said: "I think they showed they are good enough to win the title, yes.

"They have a very good team but a very good squad. When you want to win a league title you need to be consistent and they can do it."

Benitez felt his side acquitted themselves well at Anfield but the game got away from them.

He said: "It is difficult to explain when you lose a game in the way we lost.

"We started well. In the first minutes we had our chance. We didn't take our chance, we made a mistake and gave them hope and belief.

"We were in the game against a very good team, we had some moments when we were pushing, but we went in at half-time 1-0.

"Second half, a soft (Salah) penalty changed everything and now I have to explain why we conceded four goals."

Benitez admitted he had "no idea" whether he would be able to strengthen his squad in January.

Asked if any deals were lined up, he said: "No." Asked if that worried him, he added: "Yes."