Shamrock Rovers have swooped to sign Jack Byrne after the midfielder's exit from Scottish Premiership side Kilmarnock.

Byrne, a one-time prospect for the Republic of Ireland senior team, has seen his career suffer several setbacks and has returned home with a view to finding the form that saw him part of squad training with the senior international side.

He joined Manchester City as a 15-year-old and began his senior career at Dutch side Cambuur on loan in the 2015-16 season, scoring four goals in 27 appearances in the Eredivisie.

But short spells at Blackburn Rovers, Wigan Athletic and Oldham Athletic saw him fail to find first-team consistency, despite his ability surfacing on occasions, particularly with Oldham.

He featured five times off the bench for Killie this season.

Byrne said: "I’m absolutely buzzing to get it over and done with now. It’s been brewing for a few weeks and I’m buzzing to be here. I had a chat with Stephen Bradley a couple of weeks ago and it was something that I wanted to do and I felt really excited after speaking to the staff at the club and seeing the facilities that Rovers have.

"I played a couple of times for Kilmarnock this year coming off the bench, it’s frustrating when you’re doing everything you can to get into a team. They were getting good results and it was hard to get a start. I took the decision to come home and it’s the best thing for me.

"When the opportunity came to sign for Shamrock Rovers I snapped the hand off. I like to play in the middle and to be on the ball wherever that may be. We’ve spoken briefly about a position for me to play in and I think it suits both parties.

"The manager and his staff are building a strong squad and I’m very hungry to do well for the group. The League of Ireland is a very tough league; Dundalk and Cork in particular have been very strong over the past few seasons. My aim is to work hard and get into the team first and foremost.

"I want to help the team push on so that we can compete for trophies and I can’t wait to get going." 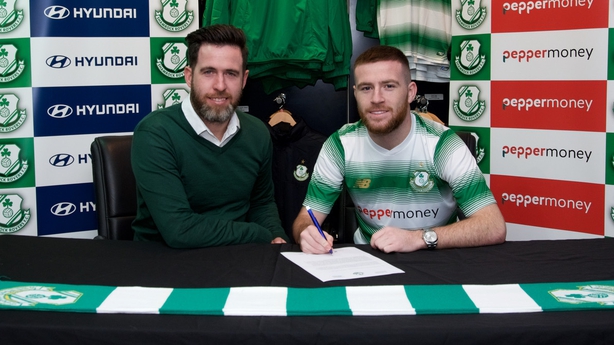 Hoops’ head coach Stephen Bradley said of the former Ireland Under-21 international:  "It’s going to be a very good signing for us. Jack has an unbelievable amount of ability. He’s a player who had three or four offers in England and financially they were a lot more rewarding for Jack to go there.

"I think it shows what sort of mindset he has and the hunger he has to show people how good he is again. And remind people that he’s only 22, not in his late 30s, he’s a young man with a lot of ability.

"We’re delighted he’s seen the next step in his career here and he wants to settle down and play his football again.

"He can do everything. He’s so creative; he sees the game very quickly and he’s a very clever footballer. He makes things happen in possession and he’ll add goals to our game by scoring and creating. I don’t think you can have too many of those in your team.

"It’s key that Jack can play in four or five different positions and he’s different to what we have right now in the team. He can play wide, behind the front man, as a team midfielder, anywhere in the attacking third of the pitch really. That area was something we wanted to strengthen.

"I’ve watched him all the way back in his Manchester City days, at Oldham, Holland and Ireland youths. He’s a top player, he just needs a platform, a stage to settle down and go back and enjoy his football. We believe that people will see the best of Jack in the next couple of years with us."