Danny Johnson arrowed a late equaliser for Motherwell to prevent Celtic going back to the top of the Ladbrokes Premiership.

Celtic paid the price for failing to build on Ryan Christie's 13th-minute opener as their dominance in possession at Fir Park counted for nothing, and they were left to rue a first-half penalty miss by Leigh Griffiths.

The champions were heading back to the top of the table three days after Rangers leapfrogged them but Johnson's 88th-minute strike ensured Kilmarnock travel to Parkhead on Saturday as leaders.

But they stumbled back to second place as McKenna's early strike handed Derek McInnes' team a 1-0 win despite the Dons playing for an hour with 10 men following Sam Cosgrove's dismissal.

Kilmarnock climbed to the top of the table after a Greg Stewart first-half double saw off Livingston.

Steve Clarke's impressive side cruised to a comfortable 2-0 win and maintained their fine recent form that has seen them lose just once in their last 11 outings.

That consistent run means they move one point ahead of Rangers and Celtic, who they face on Saturday at Celtic Park. 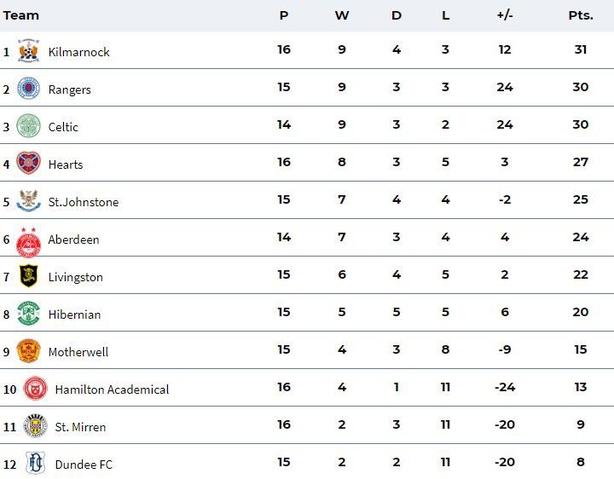 St Mirren forward Adam Hammill scored from inside his own half as Saints picked up a point in a 2-2 draw at Hibernian.

Hammill opened the scoring with his incredible strike after six minutes before Oli Shaw brought the hosts level after the break.

An Efe Ambrose own goal gifted Saints the lead again but Ryan Porteous responded for Neil Lennon's side with a header.

Arnaud Djoum had given the visitors a sixth-minute lead but Blair Alston equalised for Saints just 14 minutes later.

Olly Bozanic then headed Hearts back in front in the 41st minute before Kennedy's spot-kick ensured the clash finished 2-2.

The 38-year-old skipper struck in the 27th minute to give the home side the interval lead and then grabbed a brace in the second-half - one either side of Jesse Curran's deflected strike - to give Jim McIntyre his first win as boss at the seventh attempt.