Maurizio Sarri extended his unbeaten start to Premier League management to a record 12 games as Chelsea were frustrated in a bad-tempered encounter with Everton.

The Italian is undefeated in competitive games at Chelsea, but must have wondered how his side missed out on a ninth league win as Jordan Pickford denied Marcos Alonso, Alvaro Morata and Eden Hazard in Sunday's goalless draw.

The height difference of one foot and Rudiger's amateur dramatics might have helped Bernard escape with a booking for motioning his head towards the defender.

Jorginho and Alonso could also be considered fortunate for avoiding greater punishment for challenges which caught the ankles of Gylfi Sigurdsson and Theo Walcott, respectively.

Frank Clark was unbeaten in 11 Premier League games with Nottingham Forest from August to October 1994; a month later came Everton's most recent win at Stamford Bridge. 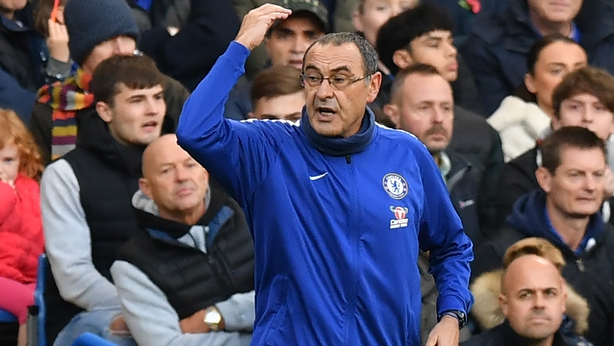 The visitors started well in their quest for a first win at Chelsea in 24 years, with Bernard shooting narrowly wide and the intensity of their press troubling the Blues.

Jorginho was felled Sigurdsson in a rare loss of composure from the Italy midfielder, before N'Golo Kante was booked for a heavy challenge on Richarlison.

Alonso then caught Walcott in front of the visitors' dugout, but there was no punishment.

Andre Gomes bundled over Hazard from behind after 39 minutes, leading to the first shot on target.

Willian floated a free-kick to the left side of the area and found Alonso, who struck a sweet volley which Pickford was equal to. 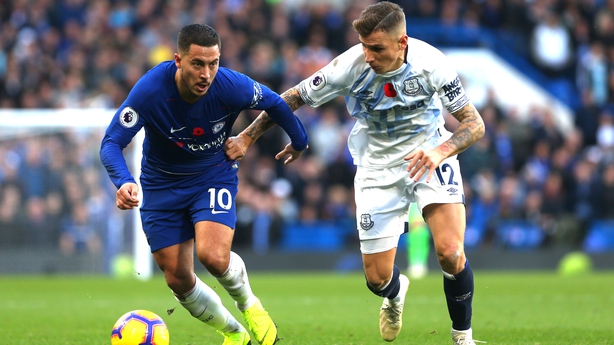 While some relished the physicality, Morata did not, going down meekly in the area with Lucas Digne in close attendance.

Next Rudiger remonstrated with Bernard for going down too easily.

With Friend running away from them to keep up with play, 5ft 3in Bernard stood up and motioned his head towards the 6ft 3in defender, who went down clutching his face and rolled around.

It was uncertain if the cautions which resulted were for the incident or the histrionics which followed.

Eleven seconds after the restart, Pickford saved Everton again as Morata tried to turn in Hazard's cross at the near post.

Ross Barkley, named as a substitute against his former club, was jeered when he set off to warm up in front of the visiting supporters and labelled greedy. He applauded in response.

Everton had chances. Sigurdsson had a drive saved by Kepa Arrizabalaga and the resulting corner flicked off Rudiger's hand, with Everton's penalty appeals in vain.

Bernard fluffed the best opportunity, failing to control a Sigurdsson cross at the back post.

Chelsea countered. Hazard freed Willian with a fine pass, but the Brazilian shot wide across goal. 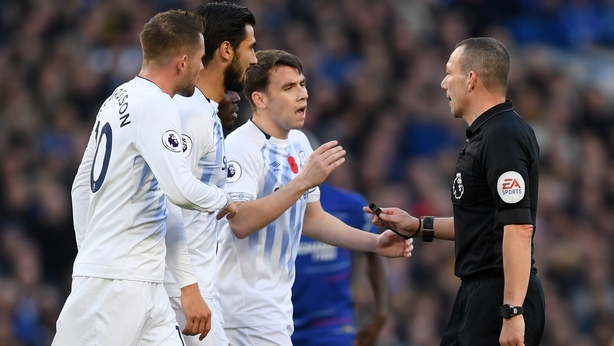 Pickford twice saved from Hazard, the second after a deflection off Mina, before Alonso hit the outside of the far post.

Morata had a strike ruled out for offside and was later booked for dissent during a break in play.

Barkley came on for Mateo Kovacic with nine minutes remaining to face his boyhood club for the first time, but there was to be no dramatic conclusion.