But Tim Clancy’s Boynesiders made hard work in overturning a 1-0 first leg deficit in this first round play-off second leg at Tolka Park as they laboured past a Shelbourne side who played for over 80 minutes with nine men.

Skinner saved penalties from Adam Evans and then Lorcan Fitzgerald as Chris Lyons, Sean Brennan, Luke Gallagher and Mark Doyle scored from the spot to see Drogheda through.

Drogheda will now host Finn Harps this Friday night with the second leg at Finn Park on Friday week. The winners then meet Limerick in the promotion/relegation play-off.

Despite being buoyed by their first leg lead and a promising start, Shelbourne’s night appeared destined to go against them from the 11th minute when they were reduced to ten men.

Already booked, central defender Reece McEnteer was shown a second yellow card and sent off for a repeat offence on Lyons.

Drogheda levelled the tie on aggregate on 33 minutes before Shelbourne had a second player sent off.

Lyons found space well on the right to pick out Brennan who controlled the cross before shooting to the top corner of his fourth goal against Shels this season.

Referee Tomas Connolly showed the striker a straight red card as Hyland was taken off on a stretcher with a leg injury.

Defending doggedly into the second half, Shelbourne held out until the 62nd minute when Drogheda took the lead for the first time in the tie. 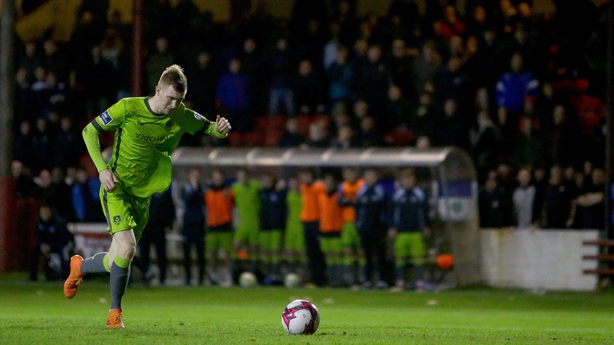 Brennan fed the lively Lyons who set off on a solo run before slamming the ball home off his left foot.

Refusing to lie down, Shels, remarkably, got a goal back on 76 minutes to bring the tie level again and force extra-time.

Substitute Evans showed his pace to get on the end of a Karl Moore cross from the right and force the ball past Skinner.

Shels right-back John Ross Wilson cleared off the line from Kevin Farragher in extra-time before Evans headed agonisingly wide in the dying minutes as the game went to penalties where Skinner and Doyle won the day for Drogs.