Ronaldo watched on as his newly-acquired Valladolid side crashed to a last-gasp La Liga defeat against Alaves.

Ronaldo, the Brazilian World Cup winner, recently bought a 51% stake in the promoted club and took his seat in the stand at the Estadio Jose Zorrilla for the first time on Sunday.

But the three-time world player of the year could do little as Ibai Gomez struck in the third minute of injury time to snatch a dramatic late victory for the visitors.

Valladolid, still to win since returning to the top flight, had looked like clinging on for a point when Gomez struck on a counter-attack. Toni Villa had missed at the other end just moments earlier.

Elsewhere, Angel struck twice in the first half as Getafe claimed a 2-0 win over Sevilla in a compelling clash at the Ramon Sanchez Pizjuan Stadium.

The striker netted within three minutes of kick-off and doubled the visitors' lead just before the interval.

Sevilla contributed to their own downfall, particularly with some poor defending in the build-up to Angel's second, and it took a brave save from Tomas Vaclik to prevent Francisco Portillo making it 3-0.

But, in an incident-packed contest which featured several VAR stoppages, the hosts did rally.

Nolito spurned a good chance when he shot wide before the interval and Jesus Navas had a penalty appeal turned down.

They also thought they had pulled one back early in the second half only for Wissam Ben Yedder's effort to be ruled out for offside.

With Ever Banega imposing himself, the hosts went on to dominate the second period but Getafe dealt well with their threat and held on despite nine minutes of injury time. 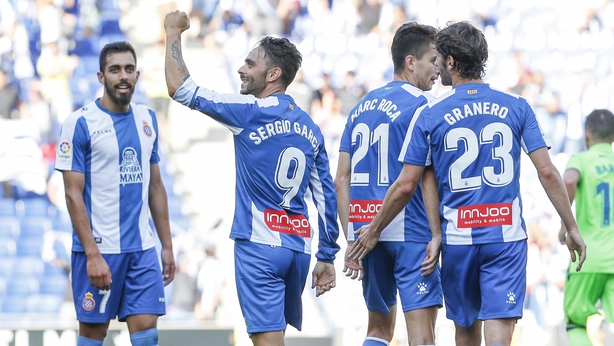 Espanyol maintained their positive start to the season with a 1-0 win over Levante.

Sergio Garcia scored the winner with a long-range effort after 52 minutes at the RCDE Stadium.

Carlos Bacca scored the only goal as Villarreal won by the same score at bottom side Leganes.

The Colombian headed home after 65 minutes from a Miguel Layun cross, earning his side their first win of the campaign.

Leganes were left with just a point from four outings and still awaiting their first victory.