Dundalk are through to the semi-finals of the FAI Cup for the fourth consecutive season after thrashing Limerick at the Markets Field.

Pat Hoban scored twice in the opening 20 minutes and put the game to bed, before John Mountney added a third before the break.

Limerick boss Tommy Barrett named an unchanged side from the XI that held Dundalk scoreless for 81 minutes in their encounter at the Markets Field only seven days previously.

Despite the makeup on that night being somewhat makeshift, the Limerick chief believed their performances merited another attempt to toppling the league leaders on home soil.

Dundalk put in one of their poorest performances of the season in last week’s somewhat fortunate win over the Shannonsiders and Stephen Kenny wasn’t quite as forgiving as his opposite number in terms of team selection.

It seemed on that occasion that the pressure of a title race was catching up to Stephen Kenny’s men. But with Duffy’s strike getting them back on track and Raffaele Cretaro’s winner in Turner’s Cross putting them within touching distance of another Premier Division title, they could finally exhale.

That’s when Dundalk are most dangerous. They didn’t spend an age getting down to business, either. It took Michael Duffy 81 minutes to break the deadlock at this venue only a week previously but Pat Hoban only needed five on this occasion.

Clever interplay between Robbie Benson and Ronan Murray afforded the latter an opportunity to run the left-hand channel. He did, and crossed low along the face of the six-yard box where Hoban was waiting for a tap-in to open the scoring.

He would score from nearly the same position fifteen minutes later, too. Dane Massey floated a cross into the area where Limerick ‘keeper Tommy Holland should have claimed, but instead allowed Hoban to power a header past him into the corner. 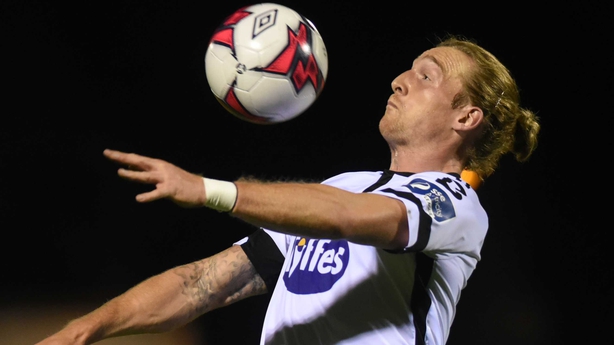 That tie was all but over after 20 minutes, but that didn’t stop John Mountney from adding a further goal before the half-time whistle.

Given the comfortable situation the visitors found themselves in, they were afforded the chance to give some fringe players minutes.

Georgie Kelly was one of those – and he netted the Lilywhites’ fourth in the 71st minute.

Stephen Kenny has now found himself closing in on a league and cup double – and claiming both trophies back from arch rivals Cork City in the process.