Holders Cork City and Dundalk, who have contested the last three finals between them, both booked their place in the last eight of the Irish Daily Mail FAI Cup.

John Caulfield's Cork were comfortable 4-0 winners over Maynooth University Town in the end but it took them until the 29th minute to open the scoring through Aaron Barry.

Kieran Sadlier, Josh O'Hanlon and Ronan Coughlan added the gloss in the second half at Turner's Cross.

Ronan Murray opened the scoring with a penalty in the 24th minute after Dane Massey was fouled by Jacob Borg. 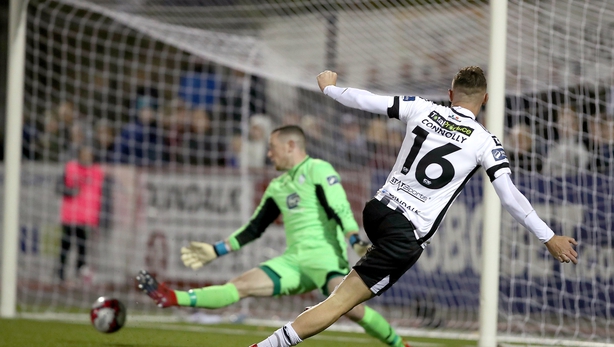 Leinster League side CIE Ranch almost pulled off a sensational upset against First Division leaders UCD before succumbing 6-2 after extra-time.

The hosts took an early lead through an own-goal by Daniel Tobin and amazingly were two up by the 16th minute when Edward Smith scored.

Yousef Mahdy hit back for UCD before half-time but, despite a red card for CIE's Gary Sullivan in the 75th minute, they only drew level through Jason McClelland with a minute to play.

The man advantage told in the extra 30 minutes as Sean McDonald, Mahdy, McClelland and Gary O'Neil gave the scoreline a flattering look.

Patrick Byrne of @CieFc celebrates with the non-league club in dreamland! ??

CIE Ranch are currently 2-1 ahead at the break! Check out all of the action so far ??

Limerick had a nervy final few minutes against Cabinteely at the Markets Field before prevailing 2-1.

Connor Ellis had given the Blues the lead on the half hour after pouncing on a loose backpass from Karl Manahan. Barry Maguire doubled the advantage in the second half before Kevin Knight's injury-time ensured a tense finish.

Waterford United advanced to the last eight for the first time since 2009 with Bastien Hery’s fourth-minute goal ending Drogheda United’s interest in the competition for another year.

First Division side Drogheda had chances to level but their attentions will now turn to sealing a return to the top flight.

Gerard Doherty saved a 95th-minute penalty to ensure that Derry City booked their place in the quarter-finals after an incredible finale against St Patrick's Athletic at the Brandywell.

Bohemians advanced with a dominant 2-0 win over Galway United at Eamonn Deacy Park.

An early strike from Darragh Leahy and a late one from substitute Eoghan Stokes ended Galway's interest in relevant football for the guts of six months, their woes evinced by a paltry home crowd.

Longford Town host Shelbourne in the final tie of the round tomorrow.