Cork City face a monumental task if they are to progress to the play-off round of the Europa League after their defeat against a talented Rosenborg side at Turner’s Cross on Thursday evening.

A first-half brace from Jonathan Levi was enough to see Rosenborg take a commanding lead into the second leg in Trondheim next week.

John Caulfield named an unchanged side following his side’s important come from behind win away to Munster Rivals Waterford last time out.

Mark McNulty made his first appearance in Europe this season after missing the two Champions League first-round qualifier defeats to Legia Warsaw whilst Graham Cummins was handed his first ever home start for the club in European competition.

City started brightly and forced a couple of early set pieces in and around their opponent’s penalty area but it was Rosenborg who had the first opportunity of note after eight minutes.

Danish international Mike Jensen found himself in space twenty plus yards from goal but his powerful strike was saved low to his left by City keeper Mark McNulty. 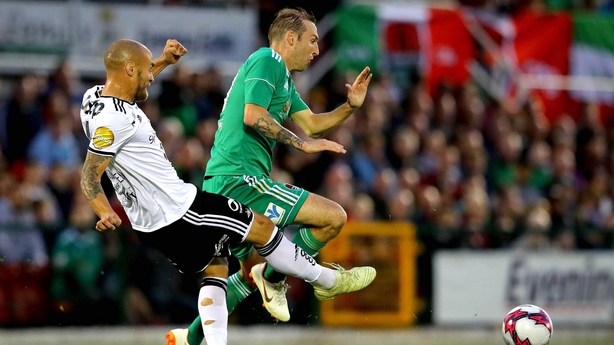 Rini Coolen made one change to his side which beat City rivals Ranheim 3-1 away from home last Saturday evening, moving them into second in the Norwegian Eliteserien and just two points behind league leaders Brann.

But it was the Leesiders who continued to look the better side with Barry McNamee have a goal-bound attempt blocked before forcing the visiting goalkeeper into a save with his next attempt after 14 minutes.

Cummins, who ended his drought of seven games without a goal against Waterford, was next to threaten the Rosenborg goal moments later but he drilled Karl Sheppard’s neat lay-off wide of the top right corner.

And in the 22nd minute, the match suddenly swung in the Norwegians favour as they took the lead through Jonathan Levi.

The Swedish under 21 international skipped past Shane Griffin inside the box and drilled a fierce strike under the feet of McNulty at his near post.

The 5,488 in attendance soon grew anxious and they almost fell two goals behind when Levi latched onto a ball over the top of the defence but McNulty was equal to his shot on this occasion.

Levi curled a long-range free-kick inches wide of the bottom left corner just shy of the half an hour mark before City eventually regained their composure and again started to chances.

Garry Buckley almost caught out the keeper with an effort towards his near stick before Karl Sheppard sent a fierce drive narrowly wide of the left upright.

But Rosenborg, who have won the last three Norwegian titles, again showed their class just before the break as Levi doubled their advantage following a lovely attacking move.

Marius Lundemo’s crisp pass picked out Levi and following an incisive one-two with Mike Jensen, the winger rifled the ball into the net via the inside of the near post.

City, desperate to grab a goal to take into the return match, introduced Kieran Sadlier from the bench at half time and he twice went close past the hour mark.

The winger saw an effort with the outside of his right boot sail just over from a tight angle before Hansen tipped his superb free-kick around his right post.

But with the Leesiders piling players forward, they were left exposed to the counter-attack and with 15minutes remaining, Rosenborg ought to have added a third.

Levi cleverly nodded a cross to the back post into Jansen’s path but the midfielder somehow sliced the ball wide of the target from a few yards.

City continued to battle and they were inches away from halving the deficit in the closing stages but Garry Buckley failed to connect with Kieran Sadlier’s inswinging free from the left.