Cristiano Ronaldo will ply his trade in Serie A next season after Real Madrid agreed to sell the five-time Ballon d'Or winner to Juventus in deal worth up to €112m and here is how team-mates past and present reacted to the news of the transfer.

Real Madrid captain Sergio Ramos sent a thankful message on Twitter, which translated as: "Cristiano, your goals, your numbers and everything we have won together speak for themselves. You have deserved a prominent place in the history of Real Madrid.

"The Real Madrid fans will always remember you. It's been a pleasure to play your bug side. Strong hug and luck...!!"

Wales international Gareth Bale, who replaced Ronaldo as the world's most expensive player in 2013, gave high praise to his fellow forward.

An incredible player and a top guy! It has been a pleasure to play alongside you for the last 5 years. Good luck for the future my friend ???????? pic.twitter.com/KBYLMYaWjP

The 28-year-old said on Twitter: "An incredible player and a top guy! It has been a pleasure to play alongside you for the last 5 years. Good luck for the future my friend."

Spain international Marco Asensio, who could replace Ronaldo in Julen Lopetegui's side, also sent a message on Twitter to his former team-mate.

He said: "It has been a pleasure to play by your side, you have been an example in every way. I wish you good luck in your new stage."

Toni Kroos has won the Champions League crown in three of the four seasons since joining Real from Bayern Munich and he appreciated the contribution that Ronaldo added in their European triumphs.

Crucial for the trophies we won in the past years! A true champion. It was a pleasure playing with you! All the best, legend. @Cristiano pic.twitter.com/1C5x2ARSBT

"Crucial for the trophies we won in the past years! A true champion. It was a pleasure playing with you! All the best, legend," the German posted on Instagram.

Fellow Germany midfielder Sami Khedira, who was a team-mate of Ronaldo's at Los Blancos, shared a picture of the pair celebrating during their time at the Bernabeu, and he is looking forward to linking up with the Portugal international once again at Juve.

He tweeted: "Welcome to Turin, Cristiano. We had a great time together in Madrid, I can't wait to get back to work with you! Today is a special day for Juventus!"

Paulo Dybala, who only played 22 minutes for Argentina at the World Cup, will be hoping to forge a fruitful partnership with Real's all-time leading goalscorer - and even made the former Manchester United man feel at home.

He wrote on Instagram: "Bienvenido Cristiano! Benvenuto! Bem-vindo," which translates to welcome in Spanish, Italian and Portuguese. 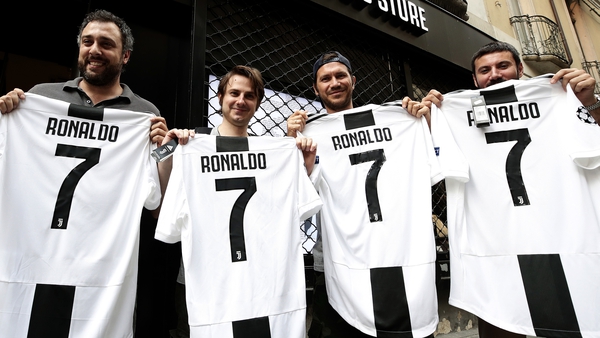