Despite utterly dominating the first 45 minutes and leading from Graham Burke’s goal, Rovers allowed Limerick, on the anniversary of their league title win of 38 years ago, back into this SSE Airtricity League Premier Division game in the second half.

And the Shannonsiders duly took their chance on 86 minutes to snatch an unlikely draw.

Kilian Cantwell played Morrissey in behind and the striker powered a shot across Kevin Horgan to the net.

Despite then having midfielder Cian Coleman shown a straight red card for a bad foul on Aaron Bolger right on 90 minutes, Limerick held on for a big point.

With three changes from their defeat in Bray, including impressive 18-year-old Bolger coming into midfield for his first league start of the season, Rovers started determinedly, Burke shooting narrowly wide from skipper Ronan Finn’s pullback five minutes in.

Sean Kavanagh, skying a half-volley over the top, and Roberto Lopes, whose effort at the back post from Burke’s corner was scrambled clear, had further chances before Rovers deservedly took a 15th-minute lead.

A weak defensive header dropped for Burke some 25 yards out. The midfielder took a touch before rifling a powerful low drive in off Brendan Clarke’s left-hand post for his eighth goal of the season. 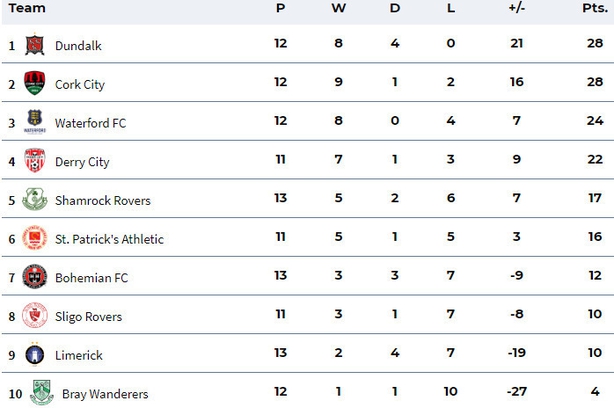 A swift counter from a corner saw Limerick cut open six minutes later. Finn’s diagonal ball found Kavanagh who swerved inside to make the space well only to shoot tamely at Clarke.

The Limerick keeper then produced the save of the game on 27 minutes, somehow getting across to tip away Lee Grace’s looping header from Kavanagh’s arced delivery.

The busy Clarke made comfortable stops from Burke and a deflected Kavanagh drive as Rovers maintained the pressure.

Overrun in midfield, Limerick switched to three at the back bringing in Shaun Kelly off the bench at right wing-back with Billy Dennehy pushed forward on the other flank.

But they might have been further behind four minutes before the interval only for another stop by Clarke with his feet from Burke following Aaron Bolger’s delightful through ball.

Rovers survived a scare two minutes into he second half as Limerick came out with far more purpose. Will Fitzgerald got free on the right to cross for captain captain Shane Duggan to plant a stooping header wide.

And slack defending should have seen Limerick level on 57 minutes.

Unmarked in the area, Morrissey should have done far better then to nod Kelly’s cross straight into the arms of Kevin Horgan.

Burke looked to steady thing for Rovers, blasting wide just past the hour mark before Gary Shaw wasted a gilt-edged chance to stretch their lead.

Finn put the big striker away from Clarke’s poor clearance.

Shaw cut inside a defender only to get little purchase on his shot which was comfortably gathered by a relieved Clarke.

Aaron Bolger and Boyle then carved Limerick open down the right with Shaw just unable to apply the finish to the low cross.