Seamus Coleman has admitted his frustration at watching the Republic of Ireland's World Cup dream slip away as he sat helplessly by.

The 29-year-old Ireland captain returned to the international stage in Friday night's 1-0 friendly defeat in Turkey a day short of a year since he last pulled on the green jersey in what was to prove a fateful qualifier against Wales.

That night, Coleman's leg was shattered in a challenge by Neil Taylor which ended his participation in a qualifying campaign which ultimately drew to a heartbreaking conclusion against Denmark in the play-offs.

Speaking after playing for more than an hour in Antalya, Coleman said: "That was the hardest part of the whole injury, to not be able to play a part and help get the lads over the line.

"If I was fit, you never know what could have happened, but it wasn't to be. But that's gone now and we started tonight to build for the next campaign.

Martin O'Neill's squad will reconvene in May for friendlies against France and the United States ahead of their inaugural UEFA Nations League campaign and then the Euro 2020 qualifiers.

Coleman could be forgiven for wishing the time away before hostilities resume in earnest, but he insists there will be no extra edge as the countdown approaches.

He said: "I don't know, I have always been quite hungry and determined. Obviously, you don't want to miss football, but my attitude has always been very good.

"I'm very committed to the Ireland jersey and long may that continue."

Coleman was one of only a handful of senior players to start against Turkey as O'Neill handed debuts to West Ham teenager Declan Rice and Aston Villa striker Scott Hogan and experimented with a 3-5-2 formation with mixed results. 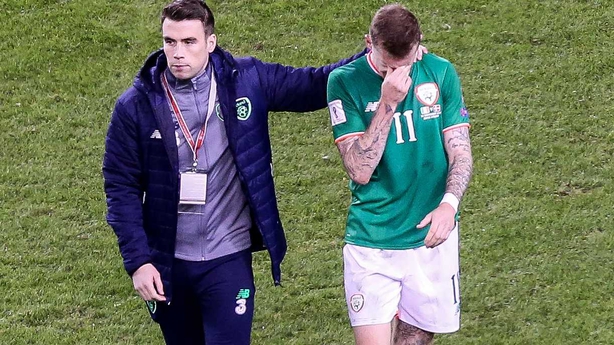 The Republic did not see enough of the ball to pose a sustained threat to their hosts - one notable first-half chance for Hogan apart - until late in the game, and were made to pay when Mehmet Topal volleyed the Turks to victory seven minutes after the break.

Coleman said: "We're disappointed with the goal we conceded, especially from a set-piece. Some of us, we could have been a bit more comfortable on the ball and we weren't."

If there was a bright spot for Ireland, it was the performance of 19-year-old Rice, who shone in both defensive and midfield roles on the night.

He and Manchester United keeper Kieran O'Hara will join up with their Under-21 colleagues ahead of Tuesday's European Championship qualifier against Azerbaijan on their return to Dublin, and he did so having more than made his mark.

Coleman said: "He was fantastic. He's a great lad first and foremost, all week in training, he really stood out and I was delighted to see him play so well there tonight.

"I thought he was very comfortable on the ball and for a 19-year-old, he drove us on a lot of the time, so long may that continue as well."