Jesse Lingard came off the bench to spare Manchester United a St Stephen's Day defeat at the hands of Burnley, scoring twice to rescue a 2-2 draw for Jose Mourinho's side.

Jonathan Walters played the last ten minutes - his first bit of football since August - and Kevin Long assisted Burnley's first but the visitors failed to hold on for what would have been a famous win.

Lingard answered a half-time SOS with United staring down the barrel at 2-0 down but pulled one back with an instinctive back-heel before striking through a packed box in added time to cap a frantic finale.

In salvaging a share of the spoils the England winger, who also had a shot deflected off the crossbar from point-blank range by Nick Pope, robbed the the spotlight from Burnley's Steven Defour, who bent it like Beckham with a sublime free-kick following Ashley Barnes' opener.

Defour was a United target back in 2009 but saw his dream move shattered along with his metatarsal and received a letter of commiseration from Alex Ferguson instead. 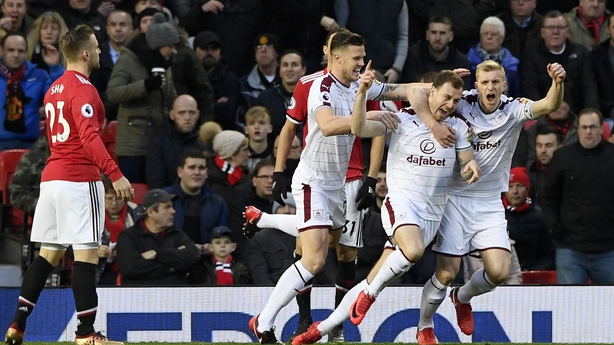 He has waited a long time to enjoy a moment in the sun at Old Trafford but Lingard meant it did not lead to a first Burnley win at the ground since 1962.

It was, nevertheless, a world away what Mourinho must have planned when he paired Romelu Lukaku with Zlatan Ibrahimovic for the first time, and rivals Manchester City can now extend their Premier League lead to 15 points on Wednesday.

Having conceded costly goals in the dying moments of their last two matches, against Bristol City and Leicester, United varied the theme somewhat by going behind inside three minutes.

Johann Berg Gudmundsson delivered the free-kick which bounced off the thigh of Corkman Long. United, Lukaku in particular, dallied and dithered until Barnes accepted the invitation to poke home.

The away end exploded, Barnes erupted and United players shook their heads before beginning a frenetic but unfocused riposte. 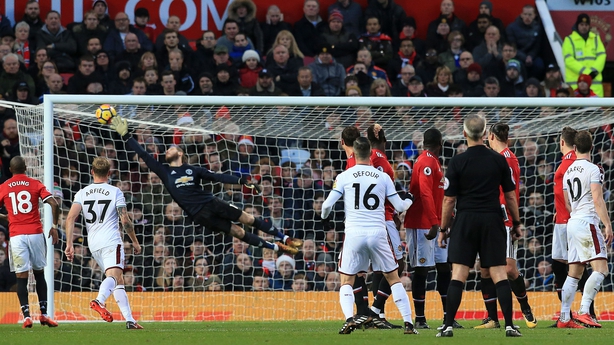 Ashley Young was at the heart of it, but his selection of whipped crosses went unconverted.

In the meantime Burnley almost doubled their lead when Scott Arfield's instep volley crept over David De Gea and skipped off the crossbar.

United skipper Paul Pogba was doing his best to lift the hosts, and saw a deflected header pawed clear by the excellent Nick Pope, but by then the Clarets contingent had already started comparing the #90million man unfavourably to Dean Marney. It was becoming that kind of afternoon.

Another free-kick, Young transgressing this time, handed the visitors an appealing sight of goal and Defour produced a stunner.

The Belgian struck his 20-yard effort as sweetly as possible, leaving De Gea groping at thin air and United staring at a humbling reverse. 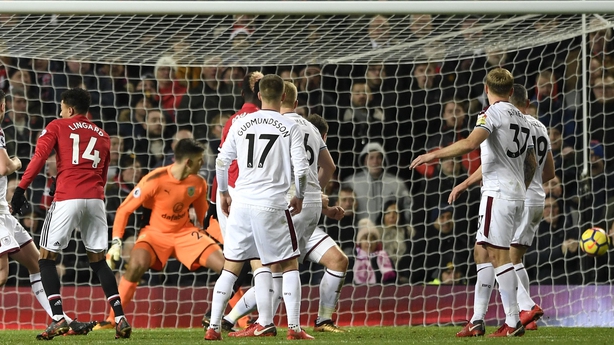 Marcus Rashford and Ibrahimovic were both denied by last-ditch defending before the break, Ben Mee with a goalline clearance and Kevin Long a timely block.

Mourinho swung the axe at the break, removing the Swede and Rojo in favour of Lingard and Henrikh Mkhitaryan. As part of the remix, Nemanja Matic found himself reassigned to central defence.

If that had a hint of desperation to it, Lingard's arrival lifted United. He somehow failed to score from point-blank range with one of this first touches, Pope effectively glancing the winger's shot off his face on and on to the top of the crossbar. Was it bravery, anticipation or dumb luck? Burnley could not have cared less.

But there was no preventing Lingard's next attempt. The England international showed a brilliant awareness of angles as he moved to meet another Young cross, flicking into the bottom corner with an elegant back-heel.

The heat in Old Trafford immediately soared, with players, fans and staff from both sides seemingly raging against every decision.

Walters came on for Barnes with ten minutes to go but the waves of United attacks would not cease.

Five minutes of added time opened the door for late drama and it was Lingard who provided it, smashing a shot past the unsighted Pope following an uncleared free-kick.