Everton boss Ronald Koeman was forced to endure more disappointment as Lyon consigned his side to an ill-tempered defeat and more Europa League misery.

Koeman has been forced to confront the potential of "crisis" unfolding at Goodison Park and this 2-1 left his side bottom of Group E, with Nabil Fekir's penalty and Bertrand Traore's deft flick besting Ashley Williams' powerful header.

Williams was lucky to be on the pitch when he headed home the equaliser, having initiated and then extended an ugly touchline tussle involving players from both sides and, worryingly, at least one home fan.

Everton's considerable summer investment has now brought them six defeats in all competitions and no wins in their last four outings.

Koeman began with a gamble, resting his most experienced and trusted players, including Wayne Rooney on the 15th anniversary of his name-making goal against Arsenal. Rooney was not even in the squad, while the likes of Leighton Baines, Idrissa Gueye and Gylfi Sigurdsson began on the bench.

Inside five minutes Lyon had the lead. Memphis Depay, a summer target for Koeman, conjured a smart ball for Marcal to chase. The Brazilian read it quickest and was a yard inside the area when Mason Holgate charged into view and clattered into him for a clear-cut penalty.

As the ground fell silent, barring a small but merry away section, Fekir found the bottom corner and another trying day at the office began to unfold.

The lack of on-field generals was quickly apparent, Davy Klaassen chasing shadows in the centre, while Nikola Vlasic and Dominic Calvert-Lewin could not find a way into the game.

After nine minutes they were cut open again, Depay only denied by Williams' last-ditch sliding tackle. 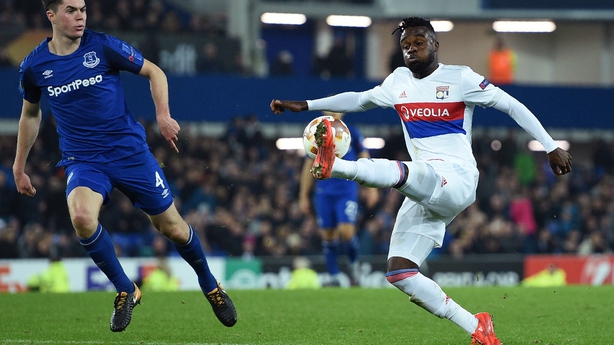 Ademola Lookman, on for the struggling Klaassen, helped energise the hosts but they were still vulnerable at the back. Myziane Maolida missed two good chances in a minute, failing to get a shot away after Michael Keane's slip then frustrated by Morgan Schneiderlin's block.

Koeman could not accuse his players of lacking fight, though in Williams' case that was hardly a good thing.

He appeared to push Anthony Lopes into the advertising hoardings but was still the most animated individual in the ill-tempered shoving match which ensued. At least one home fan laid hands on a Lyon player as members from both sides formed what resembled a rolling maul and the incident is sure to attract more scrutiny.

Williams was lucky to escape with a yellow card and was soon putting his adrenaline to better use, rising to power home Sigurdsson's 69th-minute free-kick.

The Icelandic international had come on for the injured Schneiderlin and his dead-ball prowess almost handed Everton the lead as the action came thick and fast. Keane and Williams were both close to adding a finishing touch to another teasing free-kick, which ended up evading everyone and clattering the post.

There was one last twist of the knife for Koeman though, Maxwell Cornet escaping down the right and locating Traore, who touched the ball off his instep and over the via a Keane deflection.

Calvert-Lewin's header forced a fine save from Lopes but the Ligue 1 side held their nerve in a frantic finish.