Northern Ireland boss Michael O'Neill is not worried that his side are unlikely to be seeded in the World Cup qualifying play-offs after losing to Norway.

O'Neill's side were assured of one of the eight play-off spots before kick-off following Scotland's draw in Slovenia, and they went on to lose their final group game 1-0 due to Chris Brunt's own goal.

The defeat means they are likely to face a stronger side - possibly Portugal - next month, but O'Neill is not too concerned.

"We can't be greedy. Let's be honest, we are up against some great teams potentially in the play-offs and we will just have to deal with whatever draw comes," O'Neill told Sky Sports.

"You might play a very good team if you were seeded as well. It's unlikely we will be seeded but we still have an opportunity to go to Russia.

"This team is punching above its weight massively, it has done for a considerable amount of time. The squad has been stretched massively in this campaign so deserves massive credit, we haven't rotated the team that much. 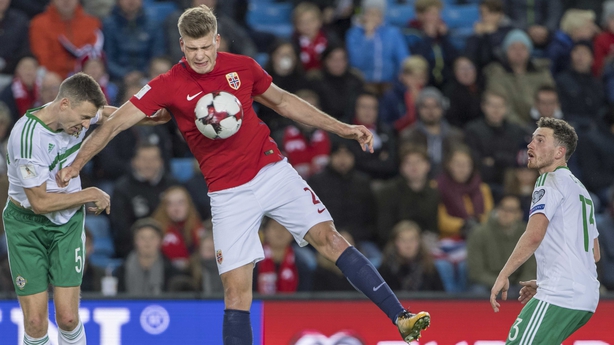 "We came through a very difficult group. When you're in a group with Germany you're almost two games down in terms of getting the points to be the best runners-up, so the players deserve a massive amount of credit for what they have achieved so far."

Had Scotland beaten Slovenia and booked their own play-off spot, Northern Ireland might have had to look after their own business in Oslo, but as it was there was less pressure on O'Neill's men to get a result.
And the boss was pleased his men on yellow peril avoided another booking and therefore suspension.

"It eased the tension in the situation," O'Neill added. "I thought at times we played some good football, at times I thought we were off a little bit.

"The lads who were on bookings got through the game without picking anything up which is a big positive for us.

"It's disappointing to lose the game, the nature of the goal is unlucky, but the main thing was to make sure we were in that opportunity of the play-off and that was confirmed before we took the field.

"You're always disappointed when you lose the game and it would have been nice to have another clean sheet but the main thing was to get through tonight unscathed in terms of suspensions, which we have managed to do and we can look forward to a massive game in November now."