FIFA has backed down in its row with England, Northern Ireland, Scotland and Wales over the wearing of poppies by players in international matches.

All four nations were fined by FIFA for ignoring warnings not to commemorate Armistice Day during their World Cup qualifiers last November.

The FAI were also fined 5,000 Swiss Francs (€4,700) after the Republic of Ireland wore an Easter Rising symbol on their jerseys during last March's friendly clash with Switzerland.

The gesture was called into question by British MP Damian Collins, who subsequently asked FIFA to clarify why the Irish were permitted to wear a symbol commemorating the Easter Rising, while the English, Welsh and Scottish teams were banned from wearing poppies.

FIFA responded by fining Ireland, with the English FA also being punished with a fine of 45,000 Swiss Francs (€42,000) after England players defied the poppy ban by wearing them in the 11 November World Cup qualifier against Scotland.

FIFA's stance - based on a strict interpretation of its laws against the use of personal, political or religious slogans or symbols - sparked widespread condemnation in Britain, with Prime Minister Theresa May calling it "utterly outrageous" in Parliament.

But now, 10 months after a FIFA disciplinary panel dished out those fines, football's world governing body has sent its member associations new guidance on law four, the section of the game's rule book on what players can wear.

In the document, FIFA says certain "initiatives" may appear on players' kits, along with the usual name, number, team crest and so on. 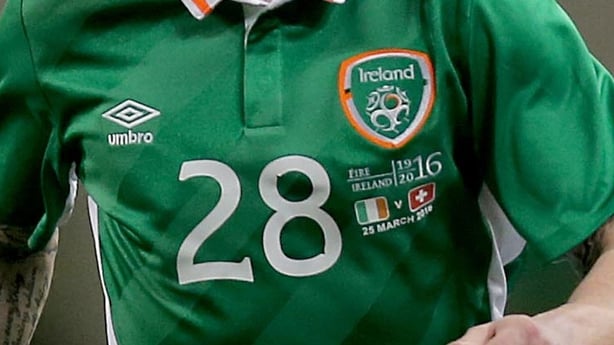 The document does not provide much clarity on what these "initiatives" might be but says they cannot breach law 12, which refers to foul play and abusive language, and restates law four's existing criteria which rule out wearing "personal" or "religious... slogans, statements or images".

This leaves "political", which FIFA admits "is less clear", although it obviously rules out slogans and symbols related to political parties and governments.

It adds: "When commemorating a significant national or international event, the sensibilities of the opposing team (including its supporters) and the general public should be carefully considered."

What this means in practice, is that England, or any other team that wants to wear poppies on their shirts to mark Armistice Day, can do so, providing they get their opponents' permission and inform the organisers of the match.

If England seal qualification for next summer's World Cup in their next two games in early October, they are set to play Germany in a friendly at Wembley in November and it is understood they have already been given permission by the German FA to wear poppies.

Many will see this as a victory for common sense, particularly as the FA was willing to go to the Court of Arbitration for Sport to contest its fine.

As it happens, the fine was never paid and now never will be.