Holland became women's European champions for the first time with a thrilling 4-2 victory over Denmark on home soil.

Having swept aside Euro 2017 favourites England 3-0 in the semi-finals, Holland fought back from an early setback to send the sell-out Enschede crowd wild.

Vivianne Miedema (2), Lieke Martens and Sherida Spitse scored for the hosts, with Nadia Madim and Pernille Harder on target for Denmark in a first half which ended 2-2.

The Danes were ahead after six minutes when Harder cut down the left and Kika van Es brought down Sanne Troelsgaard in the box.

Nadim converted from the spot but Holland were level within four minutes as Shanice van de Sanden surged past Cecilie Sandvej on the right and squared.

Miedema's calm sidefoot did the rest as she maintained her record of scoring in all three knock-out games. 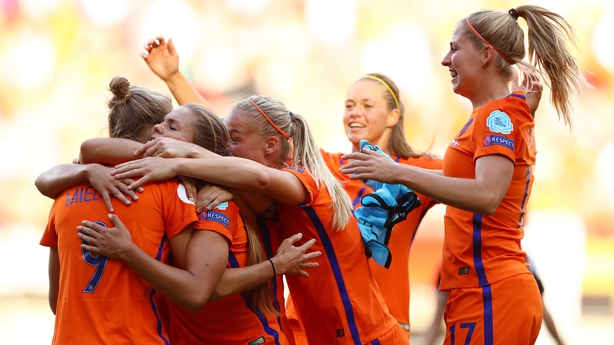 Barcelona forward Martens then put Holland ahead after 28 minutes when she controlled Desiree van Lunteren's pass on the edge of the box.

Martens spun her marker to find the bottom right hand corner of the net with a shot which goalkeeper Stina Petersen got her fingertips to.

But Denmark were level within five minutes as Harder beat the offside trap to fire past a poorly positioned Anouk Dekker in the Dutch goal.

The game was evenly poised at half-time, but Holland took control after Spitse's 51st-minute free-kick.

Petersen appeared to be confused by Danielle van der Donk's dummy run as Spitse rolled her shot low into the corner.

And Miedema got the party started a minute from time when she finished Spitse's ball over the top.