Geoffrey Kondogbia scored a incredible own goal but his blushes were spared as Inter Milan continued their revival under new coach Luciano Spalletti with a 2-1 victory over Chelsea to win the International Champions Cup Singapore tournament.

Two days after the Italian side beat Bayern Munich 2-0 at the same venue, Stevan Jovetic and Ivan Perisic put Inter into a commanding lead before a bizarre og from Kondogbia gave Chelsea hope of a late recovery.

Former Roma coach Spalletti joined Inter last month and the charismatic Italian has already instilled a steely resolve in his players, who followed up last week's win over Lyon in China with a brace of impressive victories in Singapore's National Stadium.

Inter's midfielder, Geoffrey Kondogbia has scored one of the greatest own goals of all time. pic.twitter.com/ZmcVj7p6RW

Manager Antonio Conte sent out arguably Chelsea's strongest lineup from the squad available on the tour, with record signing Alvaro Morata handed a debut start on the left side of a front-three, alongside Belgian striker Michy Batshuayi and Brazilian Willian.

Spalletti rested Martins Eder, who scored both goals in the victory over Bayern, and gave former Manchester City striker Stevan Jovetic the central striking role in a 4-2-3-1 formation.

Both sides started on the front foot, probing for openings in early exchanges, and Inter forged the first chance in the second minute when Antonio Candreva beat the offside trap but was denied by a fantastic stop from keeper Thibaut Courtois.

The London side were on top for most of the first period, but found themselves a goal down on the stroke of half-time when Cesar Azpilicueta was harshly adjudged to have brought down Jovetic in the area. Although Courtois saved his penalty, the Montenegrin blasted home the rebound. 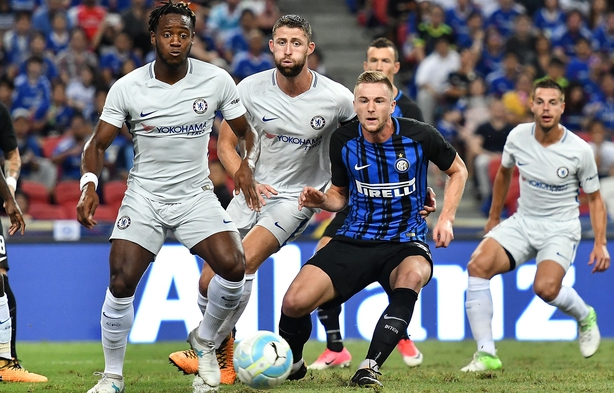 "We are improving day by day and we want to continue this going into the new season," Inter captain Miranda said in a pitch-side interview.

Both sides pressed for openings following the interval and a moment of brilliance from Ivan Perisic made it 2-0 in the 53rd minute when the coveted Croatian winger broke down the left and drilled a crisp low shot underneath the Belgian keeper.

As the contest drifted and both coaches made a raft of changes in the second half, Morata was withdrawn after 65 minutes, the Spaniard unable to really impose himself on the match and still looking short of fitness.

Inter were firmly in control until an amazing own goal gifted Chelsea a way back into the match in the 74th minute when Geoffrey Kondogbia inexplicably lofted an overhit back pass over Daniele Padelli from near the halfway line.

Chelsea were revived by the shock reprieve and launched wave after wave of attack in the closing minutes. After Batshuayi was denied an equaliser for offside, a desperate Inter managed to cling on for their third consecutive win of their Asia tour.