Two goals in the final four minutes gave Derry City the bragging rights in the north-west derby against Finn Harps - just when a scoreless draw looked on the cards.

Darren Cole smashed home the opening goal in Ballybofey from 10 yards on 87 minutes in a crowded penalty area as the hosts failed to clear a corner from Nicky Low.

In injury-time, Rory Patterson set Aaron McEneff away on the break to round Ciaran Gallagher for 2-0, to the delight of the travelling support among the 2,986 in attendance.

A draw would have been enough for the team managed by Kenny Shiels to leapfrog Shamrock Rovers back into third place after the Tallaght outfit had overcome Dundalk at the weekend.

But the victory against their local rivals who’d won the corresponding fixture at Maginn Park in Buncrana with a 2-0 victory meant City’s fans left in great voice to undertake the short trek across the border. 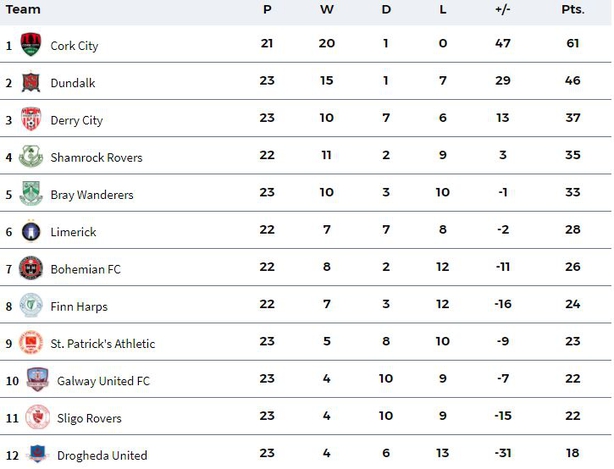 Seven minutes in, Gerard Doherty in the visitors’ goal had to be alert to race from his line and save from Sean Houston as Caolan McAleer’s quick thinking from a free-kick caught the Derry defence unawares.

On 26 minutes, Gallagher, the Harps goalkeeper was scampering back as a looping header by debutant Eoin Toal after Low’s corner looked dangerous, with Derry only denied the lead by the crossbar.

On the half-hour, Derry had a penalty appeal waved away by referee Ray Matthews when McEneff’s free collided with McAleer’s arm as he swiveled in the defensive wall.

McEneff, moments later, saw a shot from the edge of the penalty area deflect wide off Damien McNulty and Gallagher had to stand firm to get behind Patterson’s close-range volley.

In-between, Eddie Dsane of Harps almost made it three from three - following goals against Drogheda United and Bohemians - only to curl wide at the River End from 20 yards.

Derry certainly had a let-off on 43 minutes when time seemed to stand still for a second of two. Houston made space for himself in a crowded penalty area and from McAleer’s free was inches wide with his downward header. It was scoreless at the interval.

Harps, who were without the suspended Paddy McCourt, levelled up on the penalty appeals six minutes into the second half when Ethan Boyle claimed to have been pushed by Josh Daniels. Again, Matthews felt no need to point to the spot.

Low found himself in a promising position down the City left, getting away from the attentions of Damien McNulty and crossing dangerously, but with just that little bit too much height for Lukas Schubert on the stretch.

BJ Banda saw a sight of goal a couple of minutes after his introduction at the midpoint of the second half from Ciaran Coll’s ball into the area but Dean Jarvis made an excellent defensive block.

Just when it looked as though both teams would be departing with a point apiece that would have been of certain satisfaction to both, Cole’s first City goal and McEneff’s composed finish grabbed all three points for the team from the banks of the Foyle.

WATCH: Harps stay up after dramatic extra-time victory over Drogheda