Already facing a massive challenge following the first leg, Shamrock Rovers duly bowed out of the UEFA Europa League in the Czech Republic as two first-half goals from Mlada Boleslav saw them progress 5-2 on aggregate.

While an electrical storm subsided just prior to the game starting, the home side blitzed Rovers to end the tie early on.

Jan Chramosta put them ahead on nine minutes before Golgol Mebrahtu added a second just after the half hour.

FKMB also made one switch with Brazilian Douglas coming into the central defender.

Chasing two goals, and roared on by some 250 Hoops’ fans, Rovers’ Gary Shaw blocked a stinging drive from FKMB skipper Marek Matějovský in the first action of the game on three minutes.

But that was as good as it got for Rovers as FKMB took a firm grip on the game to dominate.

Mebrahtu, who tormented Rovers in Tallaght with a brace, should have done better then glance a header wide from a Lukáš Pauschek cross.

Tomer Chencinski then had to tip over from Tomáš Přikryl before FKMB’s early pressure yielded their lead goal on nine minutes. 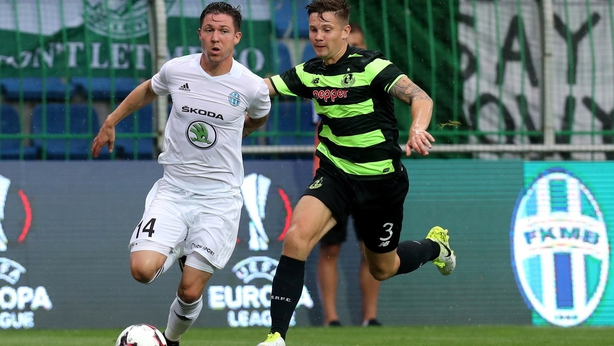 The goal all but killed the tie there and then in the perfect start for the home side as Rovers faced into a long evening.

Luke Byrne got forward on the left to drill a cross that Shaw couldn’t just connect with as Rovers tried to work their way into the game.

But they couldn't keep the ball well enough as FKMB continued to control the game, doubling their lead a little too easily on 31 minutes.

Pauschek and Pavel Čmovš carved Rovers open in from the right to set up Mebrahtu who showed ice cool composure to cut past a defender and stroke the ball to the bottom corner.

A bright start to the second half by Rovers almost brought a goal as Roberto Lopes saw an effort hit a post before being cleared for a corner from Brandon Miele’s cross.

McAllister then bounced a header wide from a Miele corner as Rovers enjoyed their best spell in the match.

Rovers battled to the end, but the tie was long since retrievable when substitute Sean Boyd had a goal disallowed for a foul in stoppage time before he and then Simon Madden worked Jakub Diviš for the first time in the match moments later.