Alexis Sanchez became Chile's leading goalscorer but he was unable to celebrate the occasion with a victory after Germany struck back in a 1-1 Confederations Cup draw at the Kazan Arena.

Sanchez claimed his 38th international goal in the seventh minute to eclipse the record set by Marcelo Salas, reaching the milestone on his 112th cap.

The 28-year-old Arsenal striker stepped off the bench to inspire a 2-0 victory over Cameroon three days earlier and he was superb once more, but World Cup holders Germany expertly secured a share of the spoils through Lars Stindl.

The outcome means both sides need only a point from their last remaining Group B fixtures to progress into the semi-finals, knowing a victory in Kazan would have guaranteed their place in the knockout stage.

Sanchez wrote his name into the history books with help from Arsenal team-mate Shkodran Mustafi, who blundered when his dreadful pass out of defence was deflected by Arturo Vidal into the path of Sanchez.

There was still work to do but Sanchez played a smart one-two with Vidal before galloping into the area and firing a left-footed shot beyond goalkeeper Marc-Andre ter Stegen.

Mustafi was lucky to escape a red card for his sickening one-footed lunge at Vidal after he had placed Sanchez in on goal in a passage of play the defender will want to forget. 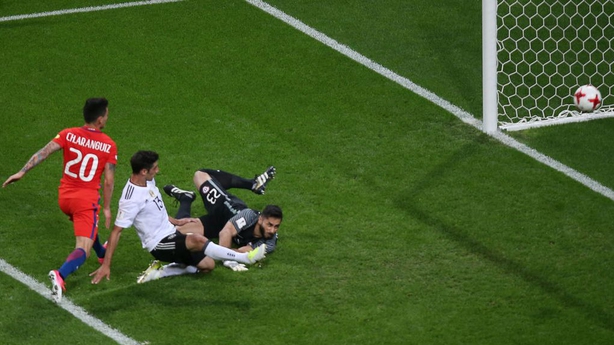 Germany were coming under sustained pressure but they drew level in the 41st minute with a wonderfully worked goal finished by Stindl.

Emre Can picked out full-back Jonas Hector with a brilliant pass and moments later Stindl arrived to stab a square ball home from close range for his second international goal.

The second half lacked the same drama, though through no lack of effort from the world champions and South American champions.

Iranian referee Alireza Faghani displeased Sanchez by booking him for kicking the ball away when the Gunners marksman claimed he was attempting to allow an opponent to receive treatment.

Chile's best chance of a goal was through their industrious forward, whose Arsenal future remains uncertain, but a Germany side containing three 2014 World Cup players - Mustafi, Julian Draxler and Matthias Ginter - defended resolutely.

Can was presented with a half-chance in injury time but he failed to connect cleanly, although there was scope for disaster when a defender unwittingly deflected the ball before seeing it drift to safety.

Going into the last round of fixtures, it is all to play for in Group B...