Dundalk and Derry meet at Oriel Park with both sides looking to close the widening gap at the top of the table to leaders Cork City.

The teams will be looking to build on impressive victories at the weekend as the champions beat Limerick, while Derry overcame Shamrock Rovers at Maginn Park. 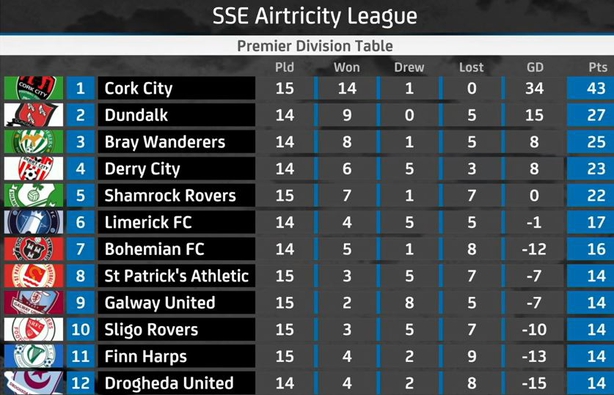 Dundalk: The Lilywhites will be without the injured Brian Gartland (hamstring), Shane Grimes (muscle) and John Mountney (groin), however, Stephen Kenny welcomes Steven Kinsella back into the squad having recovered from his hamstring strain.

Derry: Dean Jarvis is to undergo a late fitness test on a calf injury, while Nicky Low is a doubt with a groin problem.

Stephen Kenny (Dundalk): The players have responded well to the two consecutive defeats with seven goals in the last two games without reply. We face a very stern test with Derry City who have done really well recently and had a good win themselves.

"Our players are really starting to play with confidence and the new players are settling in well so we are playing well ourselves. We want to take that into the game and get the victory."

Kenny Shiels (Derry): "[Dean and Nicky] missing will weaken us considerably.  Not that the people coming in aren’t good players, they just don’t have as much experience."

Bray Wanderers will be looking to bounce back from Friday’s defeat to Bohemians as they travel to United Park to take on Drogheda.

The Seasiders dropped to third in the table following the 2-1 loss to the Gypsies and will need to secure three points to stay in touch at the top of the table.

Similarly, Drogheda suffered a loss on Friday and will need to put in a battling performance following the 5-0 drubbing that they received from league leaders Cork.

Bray: The Seasiders welcome back the league's second highest scorer, Gary McCabe, and Mark Salmon from suspension following the Bohs clash, but Darragh Noone misses out through injury.

Harry Kenny (Bray): "We were very disappointed after the defeat to Bohs last Friday night in the Carlisle Grounds.

"While we didn’t play as well as we have been on the night I thought we had enough chances to score and get some points from the game. Their goalkeeper was in inspired form and saved everything. We now have a quick turnaround and go to Drogheda on Tuesday for another tough game."

Limerick’s interim manager Willie Boland will take charge of the side for the trip to Dublin, before the newly appointed Neil McDonald takes the reins

The former Newcastle defender watched his new side go down 3-0 on Friday night to champions Dundalk; his side having to play with 10 men for the majority of the game following goalkeeper Brendan Clarke’s sending off.

Bohemians, on the other hand, will be buoyed by their victory over Bray on Friday night, which resulted in Keith Long’s side moving up to seventh in the table.

And Long’s Gypsies know that victory tonight would see them leap-frog Limerick into the top half of the table.

Limerick: Goalie Clarke misses out through suspension following his red card against Dundalk.

Keith Long (Bohemians): "Limerick are not going to be easy opponents. They've a new manager who has worked at a very high level and while they lost to Dundalk on Friday, he will have had a few days working with them to try put his own stamp on things.

"With a new manager, we can't be sure about what way he will approach the game.

"Under Martin [Russell], they were quite open and expansive. We just have to be ready to adapt to whatever way they set up.

"But we're looking forward to it, we want to build a bit of momentum now."

Neil McDonald (Limerick): Speaking to the Limerick Leader, he said: "I have been told I can (strengthen the squad). I have been on the phone non-stop. I have had a few decent replies about the people I have enquired about.

"Fingers crossed that we can push that forward and I say we have a few weeks to try and bring players in to strengthen the squad as much as we can. I have had a couple of good responses which is excellent and we will try and continue that as much as we can."