Sunday's Old Trafford encounter promises to be a mouth-watering clash as the Blues home in on the title and Jose Mourinho's side looks to kick-start their top-four tilt.

The United boss insists there is no added emotion facing former club Chelsea, but this season's defeats at Stamford Bridge clearly rankle with the world's most expensive player.

The Reds bowed out of the FA Cup after a narrow 1-0 loss in the capital last month, compounding a 4-0 league humiliation in October that still sticks in the craw.

"Well, this season Chelsea have beaten us two times and, obviously, we don't want that to happen a third time," Pogba said. "We want to win.

"We have to be focused and get ready and show them revenge, it's revenge for us. So, let's be positive about it and hopefully go and win this game."

United have gone unbeaten in 21 league matches since the October's Stamford Bridge humbling, but 10 draws during that run leaves them scrapping for Champions League qualification rather than the title.

Chelsea's far superior cutting edge means the league leaders are 18 points better off than fifth-placed United, although the west Londoners' turnaround this season should offer Mourinho's side hope.

The Portuguese was sacked in December 2015 for the Blues' dismal title defence, but summer appointment Antonio Conte, a man Pogba knows well from Juventus, has brought belief and organisation back to the team.

"They have a great team and everybody knows that," the France midfielder said.

"When you're playing in the Premier League, you have to have a bit of luck as well but you create the luck.

"They have a manager who pushes them and they have players who want to show the world that Chelsea are still alive and, last year, that didn't happen.

"But you never know, that's what the beautiful thing in the Premier League.

Pogba says the Chelsea players "know exactly what to do" under Conte, having experienced how hard players are drilled on the training ground from his time at Juventus. 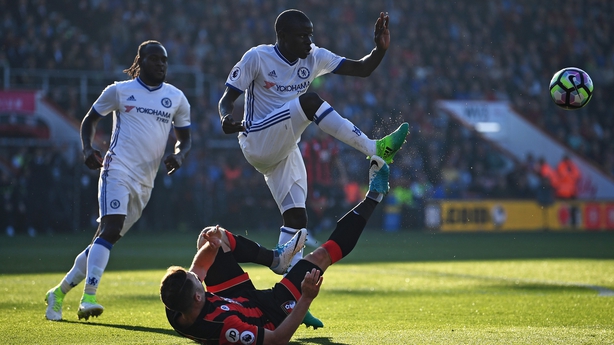 Pogba's admiration for the Italian is as clear as his respect for international team-mate, and weekend midfield rival, N'Golo Kante.

A title winner with Leicester last season, the 26-year-old continues to light up the Premier League with lung-busting displays that this week saw him shortlisted for the PFA Player of the Year award.

"Everybody knows that N'Golo Kante can run for 11 players - that's his best quality," Pogba told MUTV.

"He's one of the biggest players for Chelsea, he makes the difference because, to be honest, when you see when they lose the ball he will lose the ball three times and win the ball back four times! He's everywhere! He's a big player."