Manchester United's Paul Pogba believes his status as the world's most expensive player ever has unfairly warped expectations.

Having seen the Frenchman slip through their fingers four years earlier, United forked out an eye-watering world-record fee worth up to €110m to bring him back from Juventus.

Increased anticipation, pressure and scrutiny was only natural after becoming the world's costliest player, so too the way Pogba has struggled to fulfil such lofty expectations.

It has led to criticism that has clearly irked the France international, who laid bare that frustration in his first press conference since returning to United.

"The people are looking at me," Pogba said ahead of the Europa League quarter-final first leg against Anderlecht.

"They judge me for not scoring goals and stuff like this. If I was scoring goals, the people wouldn't talk like this but it's football.

"I am doing a job. I am a midfield player and people think sometimes I'm an attacking player.

"I think you are putting me like as a striker, defender and midfielder"

"When I give some assists to people and we don't score it can happen, nobody talks about this - but it's fine because they want me to score goals because of the mountain of the transfer.

"People are looking me saying 'Pogba should score goals', 'Pogba should do this' - I think you are putting me like as a striker, defender and midfielder.

"But I just have to do my job: my job is to make the game. Sometimes if I can make the team win, I will do it.

"But my job is to be a midfielder, make the game, do some assists and everything.

"If I was scoring the goals that hit the crossbar, I don't think people would speak like this. But it's football and we just enjoy it, we love it. It's fine." 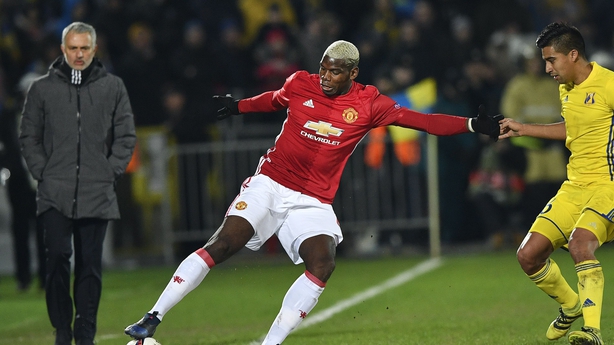 Pogba has scored seven times for United this season and hit the woodwork on nine occasions.

The midfielder was philosophical about those near misses as he spoke in the bowels of the Constant Vanden Stock Stadium in Brussels, where he talked openly about his form and United's.

"I feel great, to be honest," Pogba said. "We won two trophies. Obviously I want to do better, you can always do better.

"But I can say I am doing good, the team is doing good and we are looking forward as well to win the Europa League.

"We are trying to, we are going to fight for the top four. We can forget about the transfer fee. It's in the past.

United captain Wayne Rooney is unavailable in Belgium due to ankle pain, while Sergio Romero looks set to start in goal despite first-choice David De Gea travelling. Phil Jones, Juan Mata and Chris Smalling remain absent, but Ashley Young and Antonio Valencia trained on the eve of the game.