Northern Ireland reached the double-figure mark in World Cup qualification points and retained second spot in Group C with a pair of first-half goals against Norway.

A 2-0 victory moved Michael O'Neill's play-off seeking side on to 10 points at the halfway stage and extended their unbeaten run at Windsor Park to eight competitive games.

Jamie Ward's goal after 87 seconds set them on their way and QPR's Conor Washington fired in a third international goal, all of which have come in his three Belfast starts, in the 32nd minute.

O'Neill had stressed the 10-point landmark was key in terms of his squad's mindset towards possibly reaching Russia and they now head to Azerbaijan in the summer knowing a play-off berth remains very much on the cards.

O'Neill had warned this would be far from straightforward with Norway now under the guidance of Lars Lagerback, the Swede who had led Iceland past England to the Euro 2016 quarter-finals, yet his hopes of providing an immediate impact were scuppered inside two minutes.

Chris Brunt, playing in midfield as O'Neill restored his three centre-back system with the fit-again Craig Cathcart included, fed Ward and when his attempt to twist right failed to materialise, the Nottingham Forest forward went left instead in the box and dispatched a low drive into the corner.

It was the perfect start for a home side whose only trouble in those early exchanges surrounded a back injury to Gareth McAuley picked up in an early challenge with Alexander Soderlund.

The 37-year-old was still moving gingerly when Soderlund's hooked volley crashed against the crossbar to serve as a warning.

It looked like McAuley would not be able to continue but the West Brom defender, who has played every Premier League minute for West Brom this term, battled on and may have felt his pain alleviated somewhat with a second Northern Irish goal.

The assist came from the brilliant Steven Davis, though Norway's disjointed backline certainly made it easier, as he fed Washington to apply the finish for his third international goal. 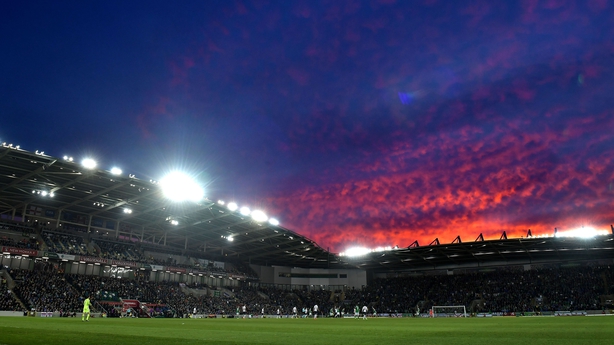 They had been the only real openings for O'Neill's side but they had taken them both, and Lagerback will have known that he was already facing a mammoth task against one of the most resolute teams on the continent.

McAuley, just one international away from eclipsing George Best's haul, was back out for the second half and seeking that total when trudging forward at corners.

One such opportunity was handed to the hosts when a mix-up between debutant Gustav Valsvik and Even Hovland saw the latter nodding just wide.

It perhaps epitomised the inexperience in a Norway defence that had amassed just 48 previous caps, fewer than either McAuley or Jonny Evans have accrued on their own.

The West Brom pairing looked typically assured even behind a midfield that was ceding plenty of possession to the Scandinavians in the second period.

Substitutes Mats Moller Daehli and Adama Diomande contributed towards Norway's improvement but there were few opportunities for goalkeeper Michael McGovern to contend with.

The visitors' skipper Stefan Johansen sliced a volley well wide and Diomande headed straight at McGovern, who was tested more with a low long-range Havard Nordtveit free-kick that needed to be tipped wide.

A third Northern Irish goal never came, with Washington's deflected effort going wide and Ward firing into a defender's legs when Brunt seemed better placed, but the job was done inside 32 minutes.

It is now on to Baku for a team that has continued to show no sign of resting on their laurels after reaching the Euro 2016 knock-out stages.