Brendan Rodgers feels he could make more use of the January transfer window at Celtic than previous clubs.

But the Celtic manager is only focused on long-term signings to help take the club to the next level in Europe rather than short-term deals.

Rodgers was speaking at the club's annual general meeting after earlier appearing to dampen speculation over a potential move for Steven Gerrard, although he remained coy about his transfer dealings.

With Celtic 10 points clear in the Ladbrokes Premiership, Rodgers' second season again looks likely to begin in the first half of July with the Champions League qualifiers, and he would prefer to give new signings time to settle in before the crucial European encounters.

The former Swansea and Liverpool boss told shareholders: "The January window, from where I came from, it was always something that if you could improve then great but it wasn't essential if the right player wasn't available.

"I will still always maintain that but I think coming here, having had the experience of the qualification campaign for the Champions League, then the January window is important.

"Because if we can go on to win the league again and get into the qualifiers then we have allowed the players to bed in and get equipped to your ideas for the qualifiers."

Rodgers is still trying to trim his squad with the likes of Kris Commons and Nadir Ciftci peripheral figures so he is looking for quality rather than quantity. The days of marquee signings such as Roy Keane appear over at Parkhead with the club's strategy focused on building value with younger players.

"The players are developing and they are only going to get better," he said. "But we certainly need a profile of player to really, really compete because the Champions League is a few steps up from where we are playing. I experienced that at Liverpool too, it was another level up from the most competitive league in the world.

"We want to bring in the right type of player to, not just help us over the long term, but to really develop this team over the next few seasons."

It is unlikely that Gerrard at 36 falls into that latter category. Rodgers also has options in central midfield with an improved Stuart Armstrong offering a serious challenge to Nir Bitton and Scott Brown.

Bookmakers have made Celtic Park the most likely destination for the former Liverpool captain after his departure from Los Angeles Galaxy was confirmed but he is not believed to be a target for Rodgers.

The former Anfield boss said: "I never speculate or speak about players coming into the club. I never have done and don't intend to start now - that will always remain private.

"The only thing I would say with regards to Steven, he has been an incredible player. I had him for a number of years at Liverpool and he was absolutely brilliant with me.

"As a young manager going into such a great club, having the captain and real senior player there, to be able to work closely together with him and learn about the club and work together on the field was fantastic.

"He decided to go to America and I'm sure he has had a good spell there. Steven will sit down now and come back and decide what he wants to do.

"In terms of the speculation, I'm not sure where it's come from."

The Celtic boss, who has been reunited with Scott Sinclair, Dorus de Vries and Kolo Toure since arriving in Glasgow, added: "Of course there's a natural look at Celtic because of the size of the club, and it's a club he admired, and also I have some of my former players here working with me. But we always keep our business behind closed doors." 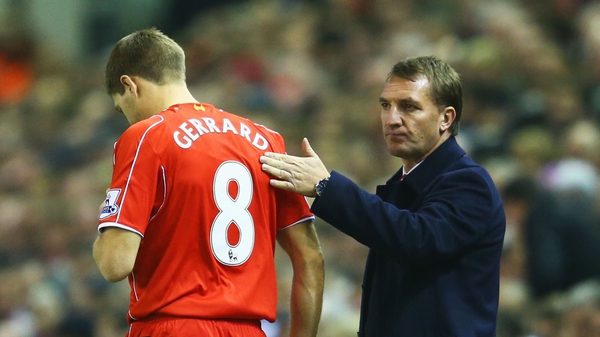