Jose Mourinho suffered no ill-effects from his touchline ban as Manchester United returned to winning ways with victory at Swansea.

Paul Pogba's blistering volley and a Zlatan Ibrahimovic double - his first Premier League goals since 10 September - put United in cruise control inside 33 minutes and secured a first win in five in the league.

Ibrahimovic, whose first goal was the 25,000th in the competition's history, tarnished his day with a fifth booking of the season which rules him out of the home game with Arsenal on 19 November, before Swansea reduced the deficit through Mike van der Hoorn's 69th-minute header.

On the 30th anniversary of Sir Alex Ferguson's appointment as United manager, current boss Mourinho was forced to sit in the Swansea grandstand after accepting two Football Association misconduct charges. 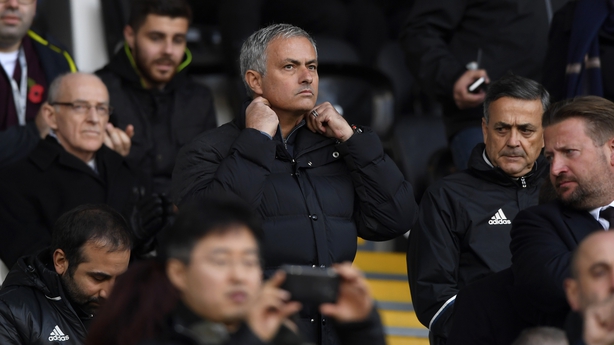 United had not scored in three Premier League games, but Swansea are probably the opposition that any stuttering team would hand pick right now.

Swansea's 10-game winless sequence marks their worst run since they joined the Premier League in 2011 and they would have dropped to bottom place but for Van der Hoorn's consolation keeping them above Sunderland on goal difference.

Hit by injury and suspensions, Mourinho shuffled his pack again with five changes from the side held by Burnley in their previous league game.

Phil Jones and Michael Carrick made their first league starts of the season and Wayne Rooney returned after being out of the starting line-up since 18 September.

Rooney was prominent in the opening exchanges, almost setting up Gylfi Sigurdsson with an errant pass across the face of his own box and then curling just wide at the other end.

Swansea had also made four changes of their own after a miserable defeat at Stoke but the curious decision to shift Sigurdsson, their most creative player, out to the left from his customary central position reduced their attacking threat.

The pattern of the game was set with United on the front foot and Pogba rewarded that superiority with a sublime 15th-minute strike.

Pogba chipped a pass into Rooney's path and, although Van der Hoorn beat Ibrahimovic to his lay-off, the France midfielder had followed up the play to unleash a terrific 20-yard volley for his second league goal. 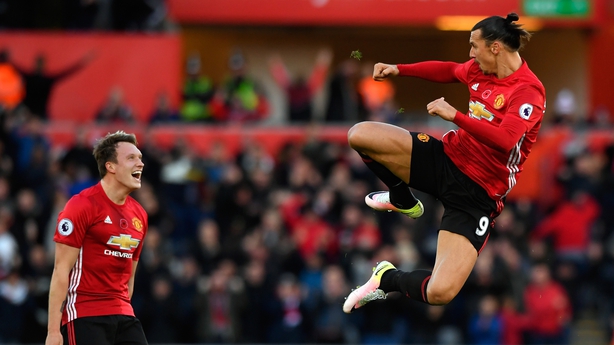 Rooney fed Ibrahimovic from the left and he shrugged off Ki Sung-yueng to deliver a low drive which Lukasz Fabianski might have dealt better with in the Swansea goal.

It was a landmark goal in Premier League history but, more importantly as far as Ibrahimovic was concerned, it was the end of a goal drought in the league which stretched back over 10 hours.

Ibrahimovic only had to wait until the 33rd minute for his next goal with Rooney again the provider, the Swede powering through Angel Rangel's timid tackle to fire high past Fabianski.

The mood began to turn ugly among Swansea supporters as they turned on board members who sold their shares to the club's new American owners in the summer.

But they were celebrating after a sterile start to the second half which saw United content to defend their lead and Swansea struggling to make little headway.

Substitute Modou Barrow won a free-kick which Sigurdsson swung into the box and Van der Hoorn escaped the attentions of Pogba and Jones.

United were now rattled with Ibrahimovic booked for fouling Leroy Fer, but they almost punished Swansea again when Juan Mata slotted Rooney's pass just wide and they held on comfortably in the final minutes.