Southampton beat Inter Milan 2-1 to secure a famous victory that takes them to the brink of the Europa League's knockout stages.

A fortnight after a defeat at the San Siro had threatened to undermine their chances, Saints recovered from going a goal behind and missing a first-half penalty to climb to second in Group K and establish a three-point lead over Hapoel Be'er Sheva in third.

Yuto Nagatomo's 69th-minute own goal decided the game, after Southampton defender Virgil van Dijk had cancelled out Mauro Icardi's first-half opener for the Italian visitors. Dusan Tadic missed from the spot on the stroke of half-time, but it did not prove decisive.

Respective home and away fixtures with Hapoel and group leaders Sparta Prague are now to come for Southampton. Draws in each would suffice, but first place is yet possible for Claude Puel's team, and would provide significant satisfaction for the manager after he again gambled with his team selection.

Two weeks ago in Milan, Southampton had lost 1-0 on an evening when a weakened XI rarely looked like scoring.

It therefore surprised when he again selected a near-identical side at St Mary's, particularly after that defeat in Italy had threatened their hopes of progressing and with struggling Hull next in the Premier League.

Two days after Inter had sacked manager Frank de Boer their visitors appeared in a vulnerable position, but even then, starting without Charlie Austin, Sofiane Boufal, Ryan Bertrand and Steven Davis represented a risk. 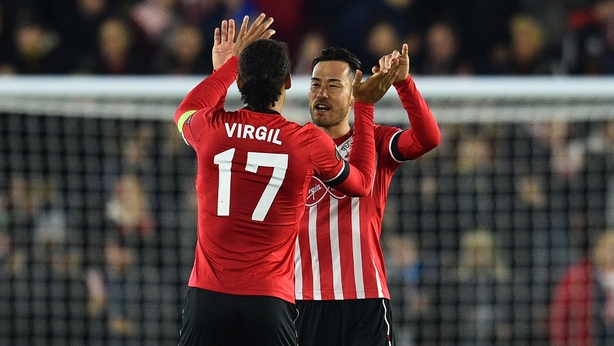 Upon the final whistle, however, Puel had been vindicated, and had ensured faith remained in the rotation system which otherwise may have come under threat.

As in the first half in Milan, Southampton enjoyed the majority of possession without ever threatening or with a goal looking likely.

Jay Rodriguez and Nathan Redmond had come closest with reasonable attempts on goal, but a passage of unconvincing defending led to Inter taking the lead.

Attempts to clear Ever Banega's low 33rd-minute cross came to little when the ball was cut back to Inter's under-fire captain Icardi, and from close range the striker classily turned and finished into the bottom left corner beyond Fraser Forster.

A handball from Ivan Perisic on the stroke of half-time gifted Southampton a penalty and the chance to equalise. In the build-up to Tadic's attempt, Antonio Candreva was booked for appearing to strike Sam McQueen with his forearm, while Inter were also appearing to tamper with the penalty spot. Tadic then saw his poor strike close to the centre of the goal saved by Samir Handanovic.

Puel responded in the second half by introducing Austin for Rodriguez, and amid the striker's focal point and greater intensity an equalising goal was secured.

James Ward-Prowse had already seen a powerful volley well saved when in the 65th minute, from the rebound to Oriol Romeu's strike hitting the crossbar, Van Dijk finished from close range.

Seizing the momentum that had been built amid Inter's lack of confidence, Southampton's winning goal came just four minutes later.

After a run down the left wing, Tadic sent a cross into the penalty area that deflected off Danilo D'Ambrosio to his team-mate Nagatomo, who then clumsily sent the ball looping into the back of the net.