England have enjoyed some memorable encounters against Germany and, while this may not have been as important as the 1966 World Cup final or as remarkable as the 5-1 win in 2001, it was a display few at the Olympiastadion will ever forget.

This was an impressive performance that underlined the progress made since the dismal 2014 World Cup, although for a while it looked like Joachim Low's ruthless side would triumph thanks to Toni Kroos' strike from distance and Mario Gomez's second-half header.

Hodgson's inexperienced side rallied rather than wilted, though, with Kane producing a lovely Cruyff turn and strike to give the visitors hope in the 61st minute.

England's other in-form striker was not to be undone as minutes after his introduction Vardy marked his fifth cap with his first international goal, wonderfully flicking home at the near post. 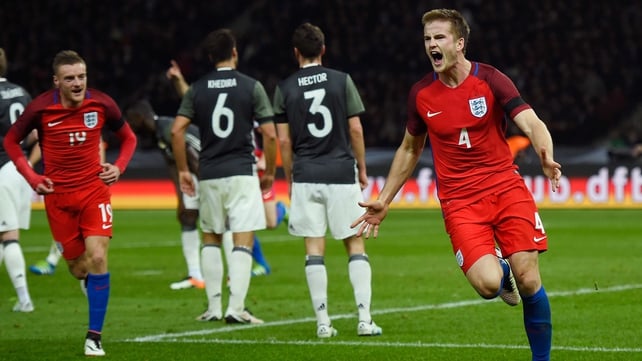 Man-of-the-match Dele Alli wasted a glorious chance to win it for the Three Lions, but Tottenham team-mate Dier made amends by heading home in stoppage time.

It was an incredible end to a night that had begun edgily due to the high level of security at the Olympiastadion.

Germany were playing away to France when terrorists tried to enter the Stade de France and let off explosives in November, with their friendly at home to Holland just days later in Hannover called off due to a bomb threat.

This was their first match since then and following this week's attacks in Brussels spectators had to undergo security checks, bag searches and pat-downs.

The resulting large queues dissipated in time for the match, as did the hostility heard during the national anthems.

Sami Khedira, Gomez and Mats Hummels had chances during the opening stages, but it was far from one-way traffic in Berlin.

Gary Cahill's header towards goal in the opening minutes was just behind the threatening Kane and the returning Danny Welbeck fired over from the edge of the box. 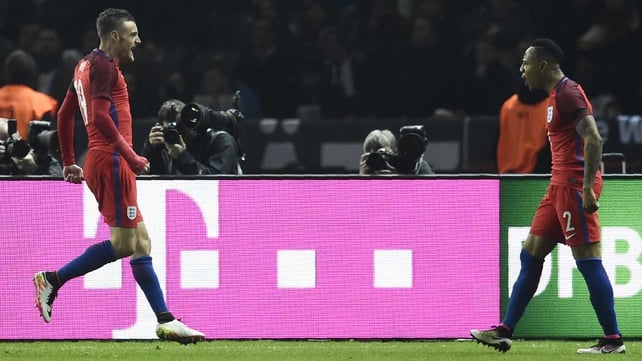 A number of the visitors' attacking moves were breaking down late on and that looked set to cost them when Gomez broke through and fired across Jack Butland, only to be called offside.

England tried to capitalise as Jordan Henderson tried his luck from distance and then Kane hooked over on the turn.

The Premier League's top-scorer was proving a handful for the world champions and produced a lovely pass through to dithering Welbeck, whose blocked effort was followed by Adam Lallana flashing over.

England were playing with confidence, but their inability to score was punished by the world champions as Kroos was able to glide forwards before unleashing a low, left-footed strike from 25 yards that beat Butland at his near post.

The Stoke goalkeeper beat the ground in frustration, not only at being beaten but picking up an injury that saw him leave the field on a stretcher.

Fraser Forster came on in his place and was soon called into action to impressively tip over a Marco Reus free-kick.

Keen not to be outdone, Manuel Neuer stopped Alli's powerful drive sneaking into the bottom corner before Henderson saw a close-range effort blocked.

The hosts would strike the next blow, though, as Khedira was afforded too much time and clipped a lovely ball over to Gomez, who expertly steered a header past Forster. 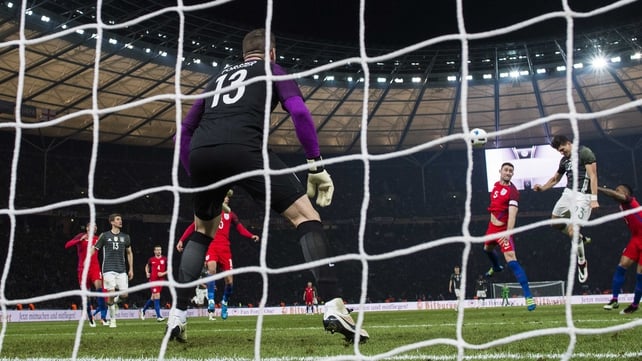 It was a great goal that looked likely to end the fixture as a contest, only for Kane to halve the deficit.

A wonderful Cruyff turn, two days after the death of the Holland great, created space and gave the in-form Spurs striker the chance to impressively fire home past Neuer from an acute angle.

Teenage midfielder Alli was denied by Neuer's feet as England looked for a leveller which arrived in the most stunning of fashions.

Substitute Ross Barkley played the ball out wide to Nathaniel Clyne, whose low cross was turned home brilliantly by Vardy just minutes after coming on.

Henderson struck wide from distance as England threatened a winner, which Alli looked certain to get when Vardy's cutback left the impressive teenager with a gaping goal.

Somehow he shot over when the 4,100 visiting fans were expecting the net to bulge, but they could celebrate wildly in stoppage-time as Dier headed home a scarcely-believable winner.