Cristiano Ronaldo believes that he is the best player in the world – better even than Barcelona sensation Lionel Messi.

The pair have been ripping up the record books between them, swapping scoring records in La Liga and the Champions League, though the general consensus is that Messi is the better of the two.

Real Madrid goal-scoring machine Ronaldo is in no doubt however, about who is the greatest player on the planet.

"I don't need to say 'I'm in the history of football, I'm a legend'. The numbers say everything," he stated.

"It's opinions, I respect the opinions. Maybe in your opinion Messi is better than me, but in my mind I am better than him. So it's simple."

Argentinean Messi is a four-time world player of the year with 418 goals in 492 club appearances.

Since leaving Manchester United to move to Madrid Ronaldo has scored at an even greater pace - 326 goals in 314 matches.

"To improve more it's very tough. I just want to maintain because this is I think the most difficult part for a football player," said Ronaldo.

The Portuguese player won the Premier League and Champions League under Alex Ferguson at Old Trafford. Since Ferguson stepped down as manager though, United have struggled to relive the glory days.

Despite Ronaldo saying it has been hard to watch their fall from the top he has refused to rule out a move back to Manchester in the future.

"For me it's hard to see that because it's a club that I love,” he said. “Of course I want to see Manchester United at the level that it was in the past.

“Like, for example, Sporting Lisbon was my first professional club.

“I like to see the clubs that I like at the top and I think Manchester this season is better, but I think they still have work to do to be at the level of six, seven years ago."

“I will say this answer all the time because the future nobody knows, but I'm good here. I still have a contract with Real Madrid and I'm happy here." 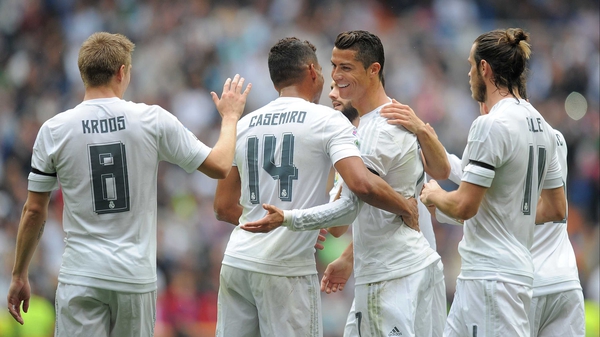