Drogheda United manager Mark Kinsella said that there can be no excuses for the club’s relegation out of the SSE Airtricity League Premier Division.

Friday night’s 5-3 defeat to Shamrock Rovers at Tallaght combined with Limerick’s win over Sligo Rovers at the Showgrounds condemned them to the drop on Friday night.

United, league champions as recently as 2007, will now play in the First Division next season while Limerick face a two-legged play-off to avoid relegation.

“Congratulations to Limerick because there was a lot of pressure on them to get a result.

“We put in a lot to this game (against Rovers), particularly in the first half, and it was disappointing to concede straight after getting the first one.

“We knew we needed to win the game, we knew it was in our own hands so it’s disappointing.

“It wasn’t down to this game or the last three or four games, it’s down to the whole season. We’re the team to get relegated. Overall the season doesn’t lie –we’re bottom and we’re bottom for a reason.

“This club has got to bounce back, though we’re disappointed now.”

The Markets Fields team had been bottom of the Premier League since April 10 and only moved out of the automatic relegation spot on the final day of the season.

They didn’t win a game until August and went 21 games without winning a match in a disastrous first half of the campaign.

But they came good in the end and now face two games against Finn Harps to preserve their Premier Division status.

“That’s all we wanted – the opportunity,” said captain Shane Duggan, who scored in the vital 3-2 win over Sligo.

“In mid-June we would have eaten your hands off for the opportunity of a play-off because things weren’t going well.

However, he warned: “We still have a lot of work to do.”

This was a comment echoed by his manager Martin Russell, who said: “We still have work to do, but we’re glad to be in that position.

“We’re looking forward to that home game on Monday and then the second leg away in Ballybofey on Friday.

“We’re still alive, the escape is still on. The players have been magnificent and so have the fans, home and away. We’d like to do it for them as much as anything.” 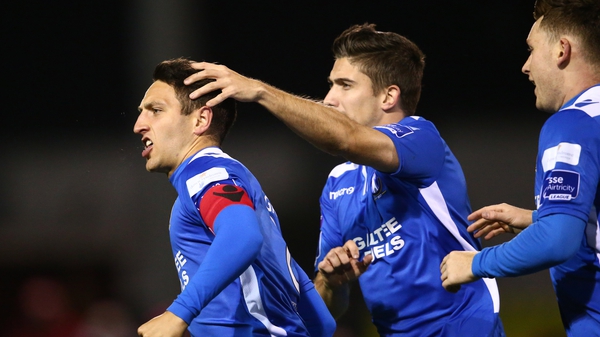 Limerick win sees them into play-off