Limerick will face Finn Harps in next week's SSE Airtricity League Promotion/Relegation play-off after a fully deserved win over a poor Sligo Rovers side at the Showgrounds that saw them rise off the bottom of the table on the final day of the season.

Martin Russell's side, who didn't win a game until August and had looked certainties to go down, blitzed Sligo during an action-packed first half.

Shane Duggan launched Limerick into the ascendency with just five minutes elapsed when he met Ian Turner's cross with the sweetest of first-time efforts from the edge of the area.

Former Rovers midfielder Paul O'Conor notched his second goal of the campaign against his former club on 28 minutes. He headed past Sligo goalkeeper Richard Brush at the second attempt after Shane Tracy's ferocious effort thumped back off Brush's crossbar.

Limerick were coasting at this stage but they had goalkeeper Freddy Hall in the 16th minute when he pushed away Dinny Corcoran's weak penalty.

Limerick defender Patrick Kanyuka had bundled Jennison Myrie-Williams to the ground inside the area but Corcoran failed from 12 yards with his meagre right-footed effort.

Sligo were never totally out of this game, however, and did strike late in injury time in the first half, Sander Puri latching on to the end of a Keith Ward cross to slam past a helpless Hall.

Limerick lived on the edge for lengthy periods during the second period.

Ward's free-kick from the edge of the Blues box whistled over Hall's crossbar six minutes after the restart.

But the worries of the travelling contingent were put at ease just short of the hour mark. Sean Russell's over-hit cross from the right was somehow kept in play. The ball made its way back into the area for the imposing Vinny Faherty to capitalise on more weak Sligo defending as he headed home Limerick's third.

The Munster men, who went an incredible 21 games without a win this year, then managed to successfully nullify the Bit O'Red attack until the 91st minute when substitute Ruairi Keating profited from a scramble in the box to thump the ball past Hall.

Limerick now welcome Harps to Markets Field on Monday night in the first leg of this year's play-off before the return tie in Ballybofey the following Friday. 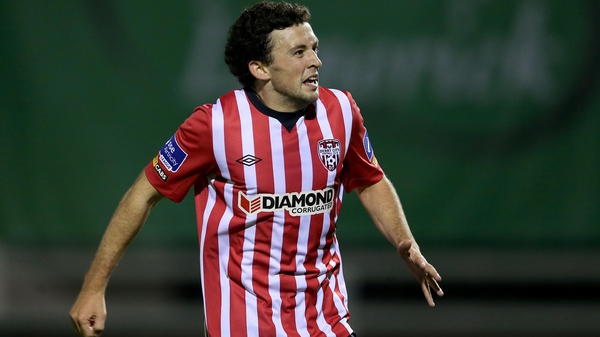