Wales moved closer to their first major tournament in 57 years as Gareth Bale's classy first-half goal gave them a 1-0 win over Belgium to go three points clear at the top of their Euro 2016 qualifying group on Friday.

Bale made the most of a defensive howler from Belgium midfielder Radja Nainggolan to calmly finish past goalkeeper Thibaut Courtois after 25 minutes, allowing the hosts to pull up the defensive drawbridge and comfortably see out the game.

It was Bale's 50th match for his country and he further underlined his status as their talismanic player as Chris Coleman's well-drilled side moved on to 14 points in Group B, three clear of Belgium who are now second.

Wales, whose only appearance in a major tournament came at the World Cup in 1958, could need just two more wins from their final four matches, with two teams from each group, as well as the best third-placed team, qualifying for the finals in France.

With a hair's breadth separating the sides after five qualifiers, it was always going to be a close affair, while goals were likely to be scarce with both teams having shown steely defensive qualities in unbeaten starts to the campaign.

Belgium had not conceded in their last three qualifiers and set the early pace in Cardiff with Nainggolan going close after 11 minutes with a curling effort that Wales keeper Wayne Hennessey superbly parried wide on the stretch.

Belgium's captain and most potent threat Eden Hazard was well shackled in the early skirmishes but did have a sniff of goal when he slashed the ball over from the edge of the area.

Having failed to make their early pressure tell, however, Belgium were punished after 25 minutes when Bale capitalised on a terrible header back towards his own goal by Nainggolan to control calmly, turn and slot his finish beneath Courtois.

That was Bales 17th goal for his country and his fifth in six qualifiers.

It triggered a brief period of home dominance and Wales should have extended their lead eight minutes later when Hal Robson-Kanu sidefooted wide from 15 metres when he looked odds-on to find the net.

While Belgium continued to press in the second half, Wales stood firm, with Belgium's best chance coming in the 46th minute when Christian Benteke poked the ball over from close range. 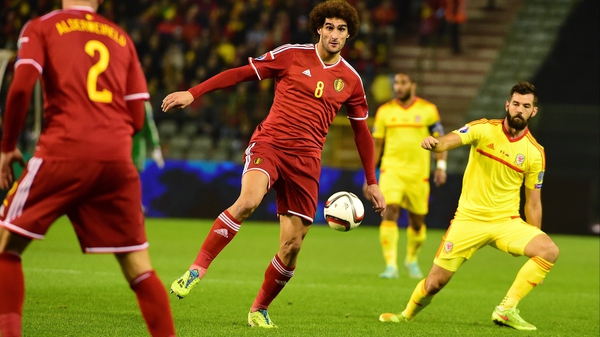