Sligo Rovers' long wait for a first league victory at the Showgrounds in 2015 finally came to an end as Owen Heary's men recorded a 2-0 win over a Drogheda United side ravaged by injuries and suspensions.

A Drogs win would have opened up a six-point gap between the two sides and Sligo were keen not to be cut adrift.

Corcoran got the Bit O'Red moving with just three minutes played as he nodded down David Cawley's through ball before firing past Michael Schlingermann in the United net for his fourth goal of the season.

Sligo's Steven Beattie headed over in the 11th minute after Sander Puri did well to evade Drogheda's Carl Walshe, while Cawley's effort from the edge of the box was off target five minutes later as Johnny McDonnell's side struggled to deal with the home side's attacking intent.

The Louth men did create a decent chance in the 28th minute when Mick Daly dispossessed Puri and released Sean Brennan down the right flank. Brennan's searching, swinging cross was a touch early for Tiarnan Mulvenna, who was milliseconds late in getting his foot to the ball with just Richard Brush to beat as Rovers managed to clear their lines.

Schlingermann was called on to push away Puri's shot two minutes before the interval. The Estonian international did well to make his way across the face of the Drogheda area before releasing a low shot which the former Sligo goalkeeper did well to push away at his near post.

The home side doubled their lead on the stroke of half-time to cap off a relatively comfortable first 45 minutes.

Corcoran was quickest off the mark in shaking off the attention of Daly and, in doing so, met Danny Ledwith's in-swinging cross from deep. Corcoran headed past Schlingermann for his second against his former employers as he became Sligo’s leading goalscorer of the season.

Corcoran volleyed over a deflected Puri effort from inside the Drogs box just shy of the hour mark as he chased a hat-trick, while Beattie's miss-hit drive soared high and wide moments later.

The second half was a relatively timid affair in front of just 1,048 spectators, the smallest of the season at Sligo.

Jason Marks had Brush on high alert in the 63rd minute, but his spinning shot landed on the roof of the Sligo net.

The Boynesiders struggled to create clear opportunities against a Rovers back four buoyed by the return of Gavin Peers from injury.

Sean Thornton dragged his shot from 20 yards astray six minutes before the final whistle, while Schlingermann pulled off a superb save low down to deny Cawley at his near post during the following Sligo attack moments later.

Brush was on hand to deny Lee Duffy in added time as Drogheda threw everyone forward, but Rovers stood firm to claim only their second league win of the campaign. 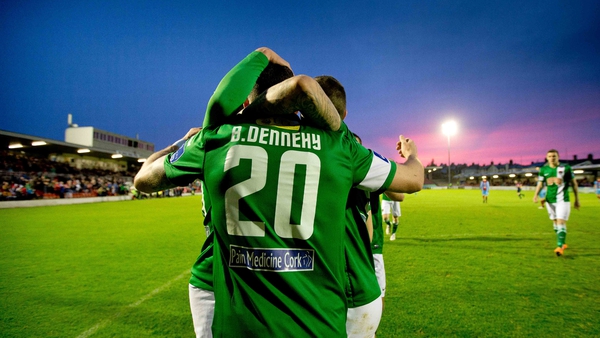